Share All sharing options for: Georgia Tech's First Down Blues

Georgia Tech's rushing attack on first down is illustrated in the chart below. Basically, I broke the chart into two long running stat lines on first down rushing attempts alone. The blue bars are the season's average yards per carry since the Middle Tennessee State game. This stat fluctuates the least with big runs or big losses. The red line is the running average of the last 10 carries up to that point so it will fluctuate a lot more. 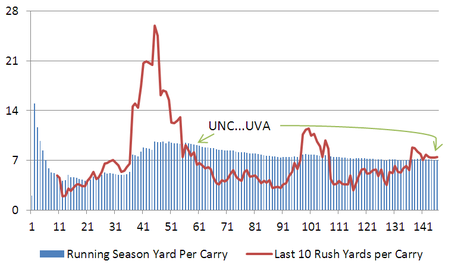 The first thing you'll see on the blue bars is that our average per carry dropped from 9.27 to 7.06 yards per carry against FBS opponents since the onset of the UNC game. That's a 24% drop in productivity in our run game on first down. Not horrible but not great. The passing game on first down has been downright abysmal. 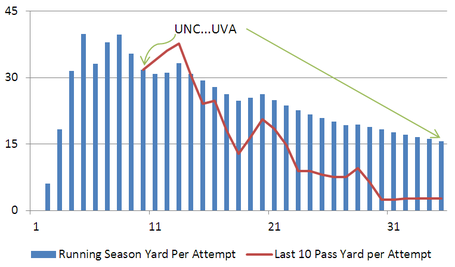 The fact that the average per attempt has dropped from 32 ypa to around 15 ypa is nothing big. The real issue is that red line featuring our last 10 passing attempts average yards per attempt. It's a big time downward trend (currently at 2.7 YARDS PER ATTEMPT@!!!@!#). If Tech wants to be successful, we can't be setting ourselves up for 2nd and 3rd and long.

Since the Middle Tennessee game, Tech has averaged 3rd down with 6 yards to go. Think about this fact: Tech has averaged 3rd and 3 yards to go 40% of the time against I-A opponents. In the last 10 3rd down situations, we've only had one 3rd down attempt with less than 6 yards to go. We're digging ourselves a nice little hole with incompletions and sacks and expecting ourselves to dig out with the same shovel. I don't think we need a drastic change but I think we definitely need to reevaluate our first down playcalling philosophy.