I stole this idea from the Daily Gopher in an effort to see which ACC teams had the coldest and warmest gameday experiences. I went back to 2008 (CPJ Era) and averaged out 12 ACC home games for each of the 12 teams. The coldest gameday temperature was in Blacksburg on November 22, 2008. The Hokies defeated Duke 14-3 on a day that averaged a balmy 25°F. The warmest and worst ACC gameday of the past three years was on September 17, 2009. In 85°F heat, the Hurricanes defeated Georgia Tech in one of the worst games I've ever seen...

When I pulled the data together, it made sense that certain places would be colder than others. But something really caught my eye. Blacksburg was almost 10% colder than Chestnut Hill, College Park, and Charlottesville on average. Conspiracy? Are the Hokies and Frank Beamer scheming with the league offices to get warm weather teams out of their vacation homes and in to the frozen tundra of Western VA? Check out this chart. 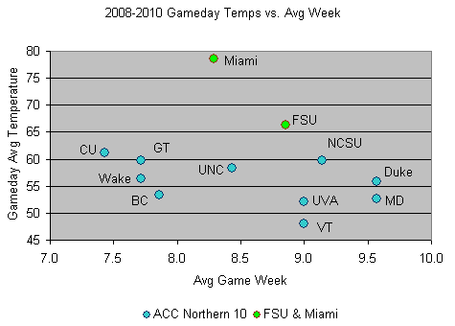 The above chart basically shows the average temperature of everybody's ACC gamedays against the average week of the college football season that the home games were played. It appears as if there is no real effort to balance cold weather home teams schedules more towards the front of the season as opposed to warm weather teams hosting games later in the season. I think a lot of it has to do with whether or not you face an SEC opponent in the last week or an ACC opponent. I do find it odd that generally speaking the bottom tier of the conference has their home games scheduled almost two weeks later than the top tier.

The other interesting thing I wanted to look at was how the warm weather teams (FSU and Miami) fared in the cold. Perhaps schedule timing and the weather gods could be hindering their abilities to "dominate" the ACC. FSU's average ACC victory since 2008 was in 62 degree weather as opposed to the average conference loss being in 59 degree weather. FSU's panhandle location appears to make them weather resistant. The bros from South Beach appear to be more sensitive to temperature. Their average conference loss was in 64°F weather while their average conference victory was in 70°F weather. I would attribute the difference in temps to homefield advantage but the Hurricanes were barely .500 in home conference play from 2008-2010.