One thing has kinda bugged me since the VT game. Georgia Tech drew 6 false starts in Blacksburg and I thought this was a particularly high count of false starts. After some investigation, it turns out this game was the second-worst performance with regards to false starts by an ACC road team since 2008 (Miami had 7 false starts in 2008 @ UVA). I am focusing on 2008-2010 because this is the Paul Johnson Era.

The announcers continually rattled on that Tech was undisciplined and should be able to cope with the crowd. I think there are more factors at play than mere discipline. An opposing defense, a backup quarterback, and the time of day appeared to be significant factors in Tech's penalty-laden effort. Want some proof? Check out this chart of induced false starts since 2008. VT and UVA lead the pack of ACC squads: 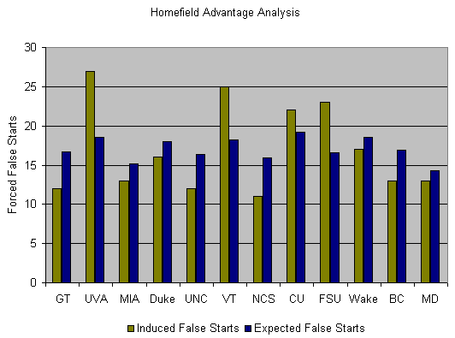 Virginia, whether you realize it or not, is a notoriously tough place to play for ACC teams. This is where FSU's ridiculous ACC winning streak was broken back in 1995. Plus, teams were always looking down the barrel of Al Groh's blitzing 3-4 defense from 2008-2009. I calculated the expected induced false starts based on the ACC offenses' tendencies to false start on the road. Certain teams showed more poise than others (e.g. VT). 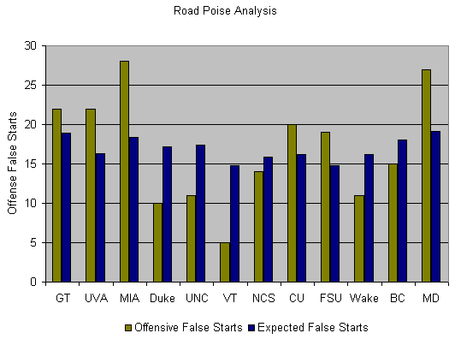 Miami and Maryland were the dogs of the conference in this regard. It's interesting to see Wake, UNC, and Duke on the positive side of this chart. I think it shows that Cutcliffe, Davis, and Grobe really do practice what they preach. Expected false starts on the second chart are based on the road venues each offense played in from 2008-2010. Any thoughts or questions?