On Tuesday we looked at the Georgia Tech Yellow Jackets defense and how efficient it was at stopping the opponent. We saw that Tech was either good and stopped teams early (Virginia) or bad and allowed the opponent to run all over them no matter where they started on the field (Miami).

Today, let's switch sides of the ball and look at how well we moved the ball. First up, offensive efficiency of the Georgia Tech Yellow Jackets. 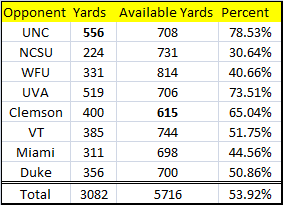 I think if we all look back over these games, these numbers make sense and can be very telling. Truly, we were inconsistent in moving the ball, but how productive where we when we made these drives? 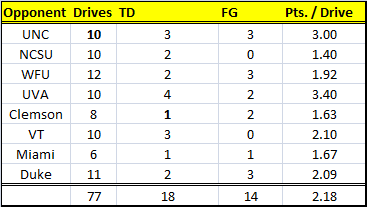 Our offensive efficiency numbers reflect the same results as our defensive efficiency numbers from earlier this week. When Georgia Tech was on, it was on. Our highest percentage games were also the game where we had the most points per drive, a direct relationship. An interesting note is that Georgia Tech had 77 offensive drives during non-garbage time while our opponents had 81 offensive drives. However, the Yellow Jackets outgained the opposition by 11 yards overall in moving the ball. This indicates that our opponents marched down the field very well in tight games and pulled ahead quickly. So quickly in fact that our offensive drives were whittled to a smaller number (numbers-wise) because our defense could not make a consistent stop.

What can we gather from this information? Nothing new really. We clearly need to improve in a variety of areas. On Monday we will look at Al Groh's defense of 2010 and compare it to Tony Wommack's defense of 2009 and see how we changed in the course of a year.

Any thoughts on this? Any surprises?