Long time ago during our Legacyx4 days, we broke down efficiencies thanks to inspiration from Hokie blogger furrer4heisman of the SBN blog GobblerCountry. Today we're doing the same thing. So HT: GobblerCountry. Thank you good sir.

Today we will look at how well our opponents moved the ball against the Yellow Jacket defense. We will do this by looking at two tables of data, defensive efficiency and points allowed per opponent offensive drive. However, garbage time has been removed from all data. Football Outsiders defines garbage time as coming after one team is ahead by more than 24 points in the first quarter, 21 points in the second or 16 points in the second half. It also excludes drives where a team took a knee or ran a play or two to run out the clock at the end of a half. While using this approach could be debatable, any full and detailed statistical analysis in college football uses this method. Georgia Tech played in very little garbage time in 2010 (2 drives against NC State and Miami)

The first is our 2010 ACC opponents efficiency against our defense. Essentially, I measured how well did our opponents drive down the field when they had the ball. For instance, if they begin their drive on the 20 yard line, they have 80 yards to reach the end zone. Should they score a touchdown, 80 yards progressed and 100% efficiency. However, if they only make it to the 50 yards line, 30 yards progressed and they are 37.5% efficient on this particular drive. All games were tallied and added up. I think we will all see a clear indicator between wins and losses. 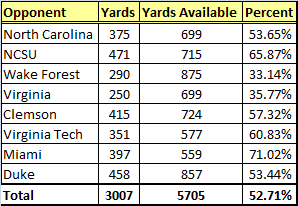 The Miami game was a tough one to analyze because of the way the numbers showed how easily the Hurricanes moved the ball. They drove down the field 7 times during non-garbage time, 5 of these drives started at or behind their own 20 yard line. They scored touchdowns during 4 of those drives. We absolutely could not stop the Hurricane offense.

After the Jump, we will look at how our opponents scored during non-garbage opportunities.

While yardage efficiencies are indicators of struggle, looking at how well our opponents completed their drives (aka "Did they score?") can be an even greater sign. Here, let's look at our opponents scoring efficiencies during non-garbage time. This is also an easy concept. How many points did they accumulate per offensive drive? Key question to think about: Does any team dominate in efficiency but trail in points per drive?

A good benchmark is the Virginia Tech Hokies. They averaged giving up 1.4 points per opponents offensive drive. Where do the Jackets align themselves with this mark? Sadly, not very close. 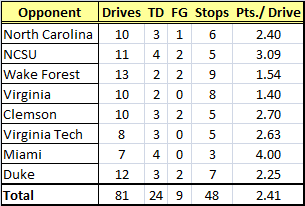 Georgia Tech gave up one more full point each time their opponent had the ball. Remember as well that there were very few garbage time drives that have been removed from the data. By looking at both tables it is easy to see that the Miami game was our absolute worst conference game. Both tables reveal the sad truth.

Summarizing these findings is simple: When the Georgia Tech defense was on, it was on (see Wake Forest and Virginia) but when it was off, it was awful (NCSU and Miami). To improve upon these numbers, the solution is obvious...work on forcing turnovers OR stop the opponent early.

Tomorrow we will look at out offensive efficiencies.