We have redone all of the calculations and added on the NFC and AFC Championship statistics. Aaron Rodgers Cal is still dominating. It'll be difficult for anyone to pull the upset and knock off the #1 yardage and points school. They've racked up over 331 more yards than the #2 school in Southern Cal and USC just lost their QB. The top 10 BCS-calibre schools in the 2011 NFL playoffs in terms of total yardage are below: 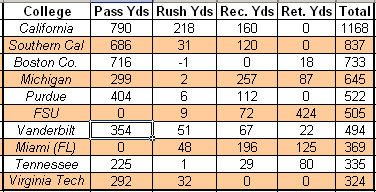 It's no surprise that Boston College is tied with Cal. B.J. Raji's interception keeps the Eagles alive in this competition at least until the Super Bowl. Here are the top ten colleges in the NFL playoffs by points scored in 2011 playoff games:

As far as conferences go, the ACC is only trailing the Pac 10 in points but is leading in total yardage. Keep in mind I threw TCU with the Big East and Utah and Colorado with the Pac 10.