Anthony Allen came to Georgia Tech in 2008 from the University of Louisville. His first season at Tech saw him as an explosive runner in Paul Johnson's spread attack. Allen played A-back or slotback in 2009. At slotback, Allen kept defenses honest by racking up almost 10 yards per carry and 6 touchdowns. His presence prevented opposing defenses from swarming the fullback and quarterback on the triple option. Easily the most memorable play of the 2009 season came off an option pitch that took Allen from the GT 19 to the Clemson end zone in 2009's Thursday nighter.
Allen transitioned to B-back (fullback) in 2010, which is the featured rushing position in Johnson's offense. He tallied 240 carries at 5.5 yards per carry. Georgia Tech's red zone woes limited Allen to only 7 touchdowns on the season. Allen was the fifth straight 1,000 yard rusher for the Yellow Jackets.

The last Georgia Tech fullback taken in the Draft was Jonathan Dwyer. He was taken by the Steelers in the 6th round and was the 188th pick overall. If we were to compare Dwyer and Allen statistically, we'd see two completely different styles of running. Dwyer had the explosion and burst to take it the distance while Allen made better reads and always picked up yardage. Check out the chart: 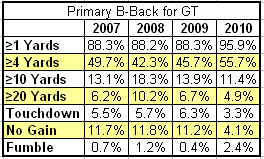 Dwyer averaged at least 1 yard in 88% of his carries from 2007-2009 or basically was stopped for no gain around 11% of the time. Allen, on the other hand, was only stopped for no gain 4% of the time. Anthony also had a higher percentage of carries go for 4 yards or more. Unfortunately, Allen was on a bad offensive unit that couldn't alleviate any pressure for the fullback position. He was consistently running against 8 and 9 in the box limiting his big plays. And despite all of this Allen was tabbed 1st Team All-ACC. According to Jason Kirk, Allen should hear his name somewhere between the 4th-6th rounds.

There are several good highlights of Allen's strength as a runner (clip 1, clip 2, clip 3). Allen's downsides are a lack of breakaway speed and a tendency to fumble as indicated in the stats. He had six fumbles in 2010 and that may be a discouraging factor to a lot of teams in the Draft as well. Allen's last chance to impress scouts before the Combine and individual workouts will be at the Senior Bowl in Mobile on January 29th.