Share All sharing options for: Georgia Tech Football: What playmakers return in 2011?

I started keeping track of every player's turnover rate and scoring rate in 2008. I've compiled lists of each rate and broken it down for you all to peruse (Chan Gailey Era-present). The list I'm presenting is limited to players with at least 100 touches (returns, passes, rushes, and receptions). With respects to scoring a TD per play, Calvin Johnson is #1. He scored a TD every 6 plays that he got the ball in his hands at Tech. Conversely, Rashaun Grant scored a TD every 105 touches. 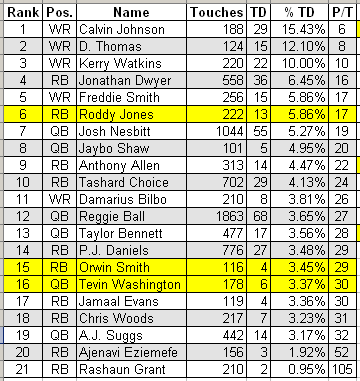 Roddy Jones has the second best rate of any RB on the list and hopefully will be a vocal leader on the squad next season. The Paul Johnson QB's are a mixed bag amongst the Chan Gailey recruits. Tevin scores every 30 plays making him the second-worst QB TD rate per play since 2001. Anyone that would like to juxtapose Paul Johnson versus Pat Nix offenses will find a good comparison here. Pat Nix primary QB's took 40% more plays to score a touchdown than Paul Johnson's primary QB's have.

Turnovers are another interesting part of this equation. Demaryius Thomas, Jamaal Evans, and Rashaun Grant never lost fumbles and all had over 100 touches at Georgia Tech. That's pretty impressive. The worst turnover rate would be Jaybo Shaw. He fumbled or threw a pick every 14 plays. Sadly, Tevin Washington is just above Jaybo at coughing up a turnover every 22 plays. Roddy and Orwin are the 9th and 10th best RB fumble rates since 2001. 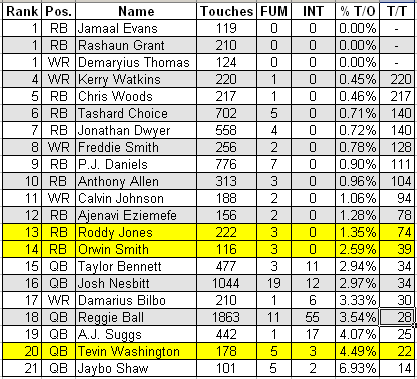 If we were to insert Jerrard Tarrant into the TD rate chart, he'd still be second to Calvin despite picking up 6 touchdowns on punt and interception returns. Stephen Hill would actually be #1 on the TD rate chart but he only has 29 touches and is well below the prerequisite coursework.