Yesterday's post about offense and points was so exciting I decided to tally all the tackles from each university in the 2011 NFL Playoffs. There are 215 different players who have tallied a tackle in this year's playoffs. They are from over 100 different universities at all levels of collegiate play including Canadian college football. Two schools, however, had the most guys tally at least one tackle. Miami and Ohio State have 8 different alums with tackles in the current NFL playoffs. Here's the top 10 of my list based on number of different players with tackles: 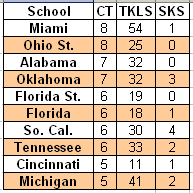 Now, anyone can go out and make a special teams tackle and register on this list so I've sorted the list by tackles to get an idea of who actually racked up the most kills thus far. 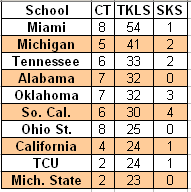 TCU and Michigan State slip into this top 10 but the king is still Miami. If we change the sort to sack total, then we completely mix it up. Miami is actually tied for twelfth in this list but due to Terrell Suggs' ridiculousness Arizona State takes the cake. 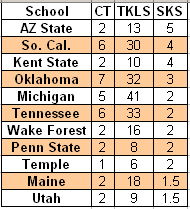 The final grouping I wanted to pick apart was tackles by BCS conference. The SEC had the most guys make tackles with 40 followed by the ACC's 34. This also led to the SEC leading the pack with total tackles in 162 but the Pac 10's Suggs Factor created a large gap in the sacks statistics.

Concerning GT's ranking in all of these statistics, I do have the numbers there as well. GT ranks 18th in total alums who have made tackles, 13th in total tackles by a single university, and 25th in sacks. For comparison's sake, Georgia ranks 12th in all three categories. In the ACC, Georgia Tech ranks 4th in alums making tackles, 2nd in total tackles, and 5th in total sacks.