In an effort to deal with the end of football season, I started breaking down the NFL playoff statistics based on every players' alma mater. The first group of stats I looked at was total yardage including special teams, defense, and offense. #1 overall California is led by Green Bay's Aaron Rodgers while #2 Boston College features two solid QB's in Matt Ryan and Matt Hasselbeck. Unfortunately, the BC QB's are both eliminated from the playoffs. Here is the breakdown by passing, rushing, and receiving yardage: 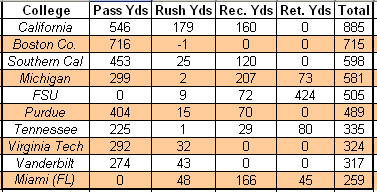 The next bit of stats I broke down were the points scored by each university since the playoffs started. This includes defensive touchdowns, kick return TD's, safeties, and field goals. Cal and Boston College are still leading the way but several schools jump up the list as points are tallied.

Now, if we were to break this down by conference, we see what a lot of ACC fans harp on. There are a lot of good skill position players in the ACC. This is also one of the reasons we pulled Miami, BC, and VT into the ACC.

You can develop your own conclusions from this information but I personally see it as a pretty strong positive message about ACC talent. The ACC has some great skill players as we see with the Pro Bowl every year. If we broke down starting linemen or tackle statistics by university, the ACC may fall behind. As far as producing elite offensive talent, the ACC is definitely one of the best conferences in college football.

GT's place in all of this is relatively simple. We only have 9 yards on an interception return and 0 points in our name. So we're dead last on the points board and 36th in total 2011 playoff yardage. We have no more players left as Philip Wheeler, Gary Guyton, and Dawan Landry have all been eliminated so we're done for the year.