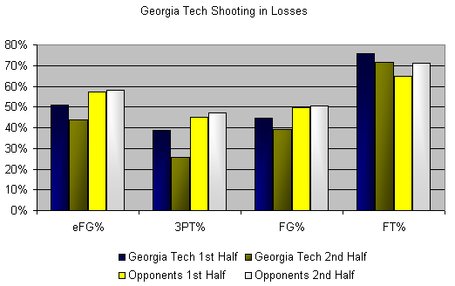 The net effect is Tech being outscored by 9.3 points in the second half of losses. We're actually fairly consistent offensively, scoring roughly 40 points per half. Our opponents just seem to find another gear in the second half (aka the adjust to our awful zone).

If you break the assists, turnovers, rebounds, and personal fouls down by half, it's about 50:50 across the board except with personal fouls. We've fouled a lot of players at the end of games inflating the PF stats. Check the chart: 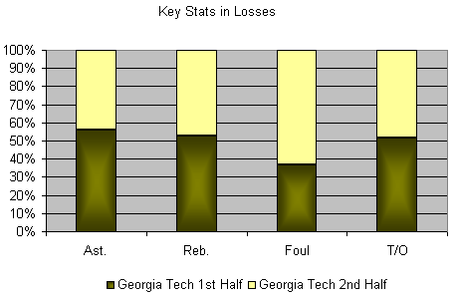 Georgia Tech's first half assist to turnover ratio is around 1.1:1 while our second half ratio dips below that at 0.9:1. Opponents maintain a steady 1.3:1 assist:turnover ratio in the first half and have averaged a 1:1 a:t ratio in the second half. Victorious opponents have gotten 13 more boards in the first half and 6 more in the second half than GT this season. Interestingly, in Georgia Tech's losing efforts we've committed two fewer turnovers than our opponents but fouled our opponents on average 6.8 more times per game.