I watched the Boston College game on Saturday and I was pretty impressed with Iman Shumpert. He has a pretty good grasp of the college game. Unfortunately, his teams have been on the short end of the stick more times than not since his freshman season. Today, I wanted to take a look at how Iman performs in losses as opposed to victories. I'm always asked about Iman when we write up Q/A's so I figure it's time to really break down Tech's feature player. First up, his effective field goal %: 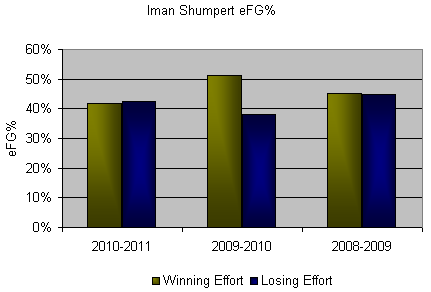 Iman is staring down the barrel of the worst 3 point shooting effort of his career (26.6%). He's 4.8% points below his freshman season and 6.8% below his stellar sophomore season. This is definitely attributing to his low eFG%. A lack of a strong inside game is definitely giving our opponents better opportunities at defending the perimeter. How do we know we've got a weak inside game? Iman is rebounding like a power forward: 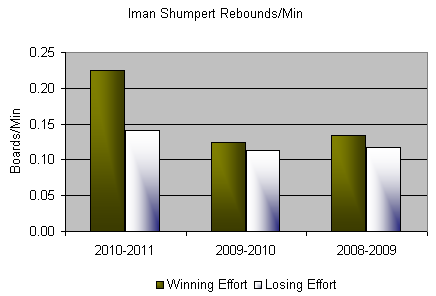 And the most important stat that everyone wants to know about a point guard is their assist:turnover ratio. Iman's is actually the best of his career despite the team's record. He's dishing out about 1.4 assists per turnover in the 2010-2011 season. 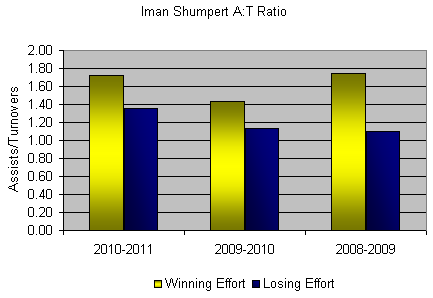 I feel for Iman. He's working his tail off and opposing fans are actually noticing him. I think there are key personnel around Iman that are a little over matched for Division I basketball and the coaching is average at best. Iman has progressed statistically since his freshman year but unfortunately the team hasn't. The team has followed the up and down eb and flow of a CPH coached program. Clemson is tomorrow night. Hopefully, Tech can pull some magic out and bring home a crucial road W.