Wild statistical generalizations based on Game 1!

Share All sharing options for: Wild statistical generalizations based on Game 1!

Alright dudes/chicas, we have played our first game in 242 days. Winfield put it best when he said we needed to get better on defense. Today, I'm gonna look at our week 1 stats as they compare to our 2008 and 2009 stats to see if we saw anything different. First, let's look at distribution of carries and other basic running stats.

We saw a ton of A-Back carries compared to normal this weekend. In 2009, we only averaged 14 A-Back carries/game. Saturday saw us pitch to the slot backs 22 times while we reduced our B-Back carry load by about 40% from 2009's standard. Nesbitt and the QB's got their normal carry load.

I know this is only South Carolina State so it's kinda unfair to compare two full seasons to one game against one of the weakest teams on our schedule but that's what we've gotta do. And in week 1, we saw the QB's take over unlike in 2008 and 2009 where the fullback and slot backs were the game breakers: 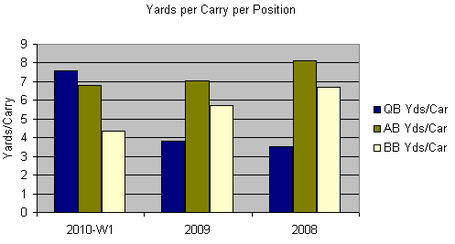 Passing was basically nonexistant on Saturday so comparing it to 2008-2009 is almost useless. From 2008-2009, we averaged about 12.3 passing attempts per game while on Saturday we only threw 8 passes. We've only passed for fewer attempts three times since CPJ's been coach (2008 FSU/uga and 2009 VT).

When we compare this week's effort to Groh's normal defensive performance, we see a lot of tackles out of the safety position and pretty low number of tackles from the nose tackle. 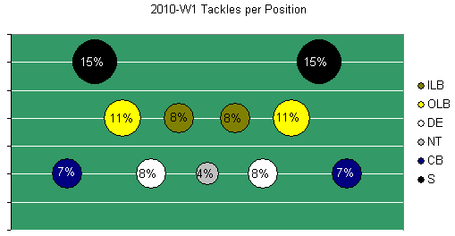 Hopefully, we can get some increased production from our nose tackle to cut down on these runs up the gut. SC State picked up 7 yards per carry from their feature back Asheton Jordon against our starting defense. There were only three feature backs that rushed for 7 or more yards per carry in 2009 against Tech: C.J. Spiller, Washaun Ealey, and Ryan Williams. This does not bode well for our rush defense in the larval stages of the 2010 season.

I'd say our secondary played fairly well. It's the first time in 11 games that the secondary has held a quarterback to below 50% pass completions. It was also the 5th time since 2008 that Tech held a team to less than 100 passing yards. Look for Tech's secondary to lead the defense in 2010.

Any thoughts out there?