Happy Anniversary To The One And ONLY Ramblin' Reck!

Share All sharing options for: Happy Anniversary To The One And ONLY Ramblin' Reck!

It was on this day in 1961 that the Ramblin' Reck made her debut against the Rice University Owls. The Jackets had a sound victory, winning 24-0 and the tradition stuck. The car has never missed a home game since that very first rideout in 1961. In fact, NC State was her 314th consecutive home game appearance. The car has been as far West as Denver, Colorado and as far North as East Lansing, Michigan.

The Ramblin' Reck is a 1930 Ford Model A Sport Coupe. The current paint scheme was handpicked by Bobby Dodd when he assumed the role of Georgia Tech athletic director. He selected a 1974 Lincoln/Ford gold as Pete George (Hapeville Ford Plant Manager) was one of the primary caretakers during the car's early years on campus. The motor has a 201 cubic inch displacement and is capable of producing 40 horsepower. The motor itself is a four cylinder L-head. The current motor in the vehicle was pressed and fabricated in October of 1929. 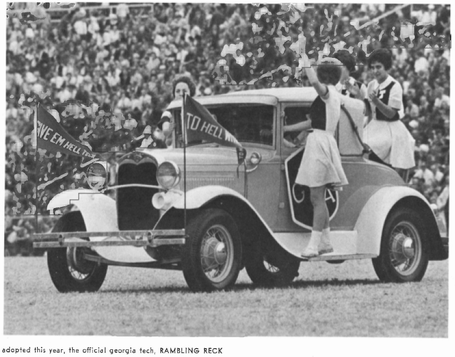 The Reck is a tradition unlike any other in college football. It's been featured in multiple magazines, newspapers, and pregame footage because of its unique style and appearance. The Reck is symbolic of the engineering spirit and American work ethic of the Georgia Tech student body. Students alongside local mechanics have maintained the vehicle since 1961.

This year also marks the 50th season of the Ramblin' Reck's presence on campus and there is currently a push to establish an endowment for the long term maintenance and restoration of the car. The endowment has been created and pursued by the Ramblin' Reck Club and you can click here for more information.

The next time you see the Reck driving around the city, be sure to give it a good "hello" honk.