Georgia Tech Defending Third Down: The Struggle To Get Off The Field

Share All sharing options for: Georgia Tech Defending Third Down: The Struggle To Get Off The Field

Note: This post is inspired by me getting frustrated at seeing the Georgia Tech defense get the NC State Wolfpack to 3rd down, then get socially awkward, not talk to each other, and allow Russell Wilson to convert yet another first down.

Third-down defense is a big influence towards overall game performance. A strong stand allows your team's offense to take the field again. A weak stand allows your opponent to continue its long death march down the gridiron. Which is why it was so frustrating to watch Georgia Tech seemingly continue to give up big plays on third down. But instead of thinking about it during a football game, I went to the numbers to follow up and see if my thoughts made sense.

Since we are currently in the middle of the 2010 season, let's look at the national statistics of defensive third-down conversions from 2009 to establish a benchmark. 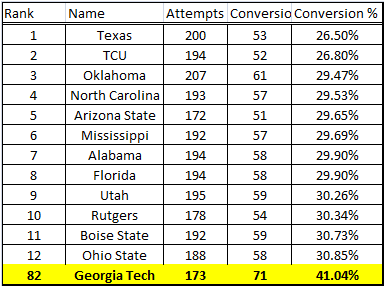 As you can see12 teams allowed only 30% or less third-down conversions all season. To be in the elite of college football, a defense needs to get under the 30% mark. The Jackets under Dave Wommack allowed 41% of third down attempts in 2009.

I ran the numbers for 2010 and broke them down. First let's look at third downs per game. I did all games and FBS-only because I wasn't sure how South Carolina State would affect the end result. In reality, not much. 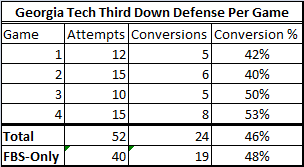 46% of the time our opponent is going to convert on third down, a decrease from 2009.

Does our defense wear down at the end of the game? Not enough data to tell quite yet as the numbers are all over the place. Garbage time has not been thrown out either. However WTF first quarter?!

Here is where I think we can begin to see one of the links to our defensive woes. 55% of the time our FBS opponents faced a third down and long, they were able to convert it into a first down. When plays like these happen it is disheartening to both the fans and the players. It is this scenario that MUST be improved.