Yesterday, I wrote about the offense's struggles with regards to field position and turnovers. Today, we're looking at the defense's. In 2009, our defense started on average with 68 yards between their backs and the GT end zone. It's about the same in 2010. The difference is the amount of resistance put forth along those 68 yards. Check out this chart based on the distance to travel for an opposing offense and their odds of scoring a TD, kicking a field goal attempt, turning the ball over, or punting: 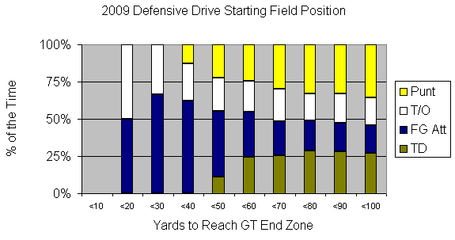 Essentially, we gave up a scoring drive 50% of the time no matter where the opponent started their drive. It was an incredibly porous defense. Now, you may think Al Groh's defense has regressed. It actually has improved in some respects. Check the graph: 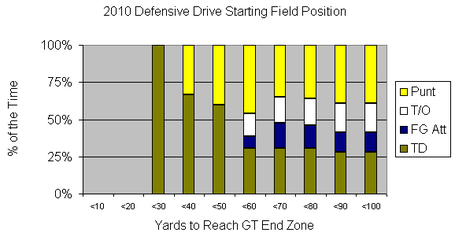 When the opponent is actually forced to march down the field against Groh's D, they perform just as well as Wommack's defense (minus two NFL Draft picks). However, we've given opponents the football on our side of the 50 five times already this season (resulting in three TD's). So, let's hope the defense can step it up and turn those gold bars down a notch. Any thoughts?