What beat the Tar Heels? Tech or themselves?

Share All sharing options for: What beat the Tar Heels? Tech or themselves?

The game literally was a tale of two completely different UNC offenses. UNC's offense was pretty unstoppable in the first half as it racked up 222 yards of offense and scored 24 points on four consecutive scoring drives. Then, someone switched the UNC offense from "Clutch" to "Choke" as UNC proceeded to punt or fumble the ball away on four of the final five possessions. A quick look at their yards per pass attempt and yards per carry average as the game progressed shows us the story of the UNC offense: 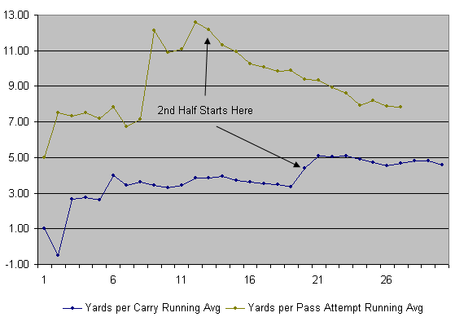 After going 11 of 13 passing for 158 yards in the first half, the Heel quarterback suddenly became human finishing 7 of 13 for 38 yards in the second half (stats include a sack as an attempt).

The fumbles killed the Heels as well. Under Butch Davis, the Heels are 2-15 when they've lost the turnover margin battle. Fortunately for Tech, both fumbles occurred in the waning moments of the game. UNC had a three and out book ended by Yates' and Pianalto's fumbles. Time of possession for UNC on those three drives was 2 minutes, 9 seconds. The three GT drives immediately proceeding each of those UNC drives of futility: 11 minutes, 2 seconds. They handed us an entire quarter of the game. Our defense only had to play 3 quarters of football. For comparison's sake, our defense only had to play 23 plays in the second half while the UNC defense had to take 39 snaps (18% more snaps over their 2009 average).

What do you think? Did Tech make good adjustments or did timely turnovers win the day for the Jackets?