Georgia Tech Football is two days away and with a new season comes a new Ramblin' Reck Driver and old memories for both me and Bird. Bird rode in 2007 and I had the keys in 2009. Bird and I take a trip down memory lane and talk about the buildup for our very first rideouts. 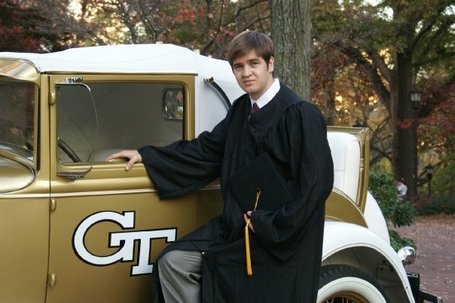 Bird: The week before my first rideout, we were still assembling the Ramblin' Reck upholstery and roof.  The car didn't have any of the classic GT decals on the doors or rumble seat door.  The car had just been painted on August 7th and was moved from the body shop to the upholstery shop on August 21st.

Bo Emerson, an AJC beat writer at the time, personally aided me in loading the vehicle into the trailer that would take the car to the upholstery shop.  Since there was no seat, I rode a coffee can with a steel chair as the chair back to give me enough leverage to press the clutch and brakes.

From August 21st to September 7th, the upholstery shop began replacing the reupholstered (yet still original) box springs for seats in the front and rumble seats.  They also repaired the roof.  GT Off Road and GT Motorsports helped me trailer the car back to campus and we unloaded it back into the garage in the early afternoon of September 7th.  I had gone to Notre Dame the weekend previous but I don't remember much of the game just a few ridiculous visuals (Touchdown Jesus, First Down Moses, Gold Dome, Jimmy Clausen sucking).

On Gameday, we were still working on the car because it kept shorting the lone fuse every time we turned on the headlights or honked the horn.  We went to Wal Mart at 3:00AM because we blew all of our fuses trying to fix it, bought every fuse they had, and came back to campus for about an hour's rest.  Winfield and myself loaded the car in the stadium at 7:00AM, slept until kickoff, and I drove onto the field at 2:20 to kickoff without a hitch.

All I remember of the rideout was the Reck Club banner ripping away to a crystal clear blue sky and an ocean of cheering fans.  The rideout was pretty breathtaking.  The first rideout is still fresh and vivid in my mind. 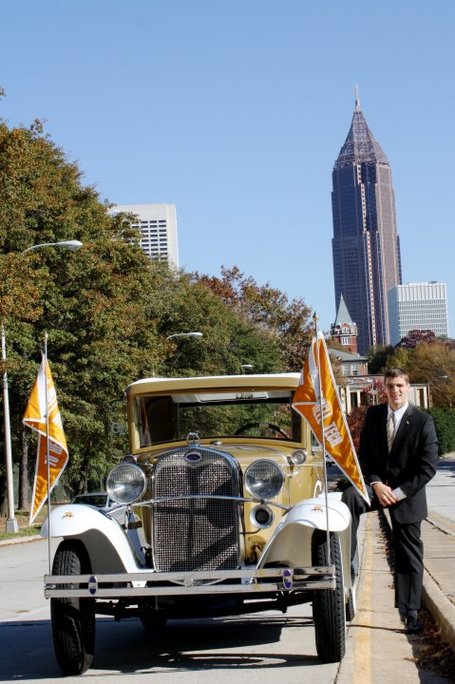 Winfield: While Bird had the urgency, I had the nerves. It was like a dream because it had entered my dreams on multiple occasions over the summer. In fact, a good majority of last season seems like a dream to this day. Did that really happen? I can think of at least 4 specific dreams that happened in late July and August and in every one the Reck went the wrong way. The week before Jacksonville State was and will be the most looked forward to 1-AA game for me.

I don't think I drove it around much that whole week except for a GTGs video shoot. Today I have a remnant of a thought of me knowing that the Reck was in good running condition and I didn't want to do anything to throw it off course. The night before the game two former Drivers, 2001 and 2003, took me out to dinner where we shared stories, ideas and plans for the upcoming season. It was a good way to relax and prepare for the next morning.

Suddenly it was Saturday.

I was up at the crack of dawn and down at the garage by 8am ready to drive her around campus, swing past the parents' tailgate and get in the stadium. I was at least 30 minutes early to everything.

There were quite some memorable experiences that day that I'll never forget. The first was that I got to meet President Peterson and his wife Val as they rode in the rumble seat for Player's Walk down Yellow Jacket Alley. The second, was the strangest way to ever meet a college football coach: 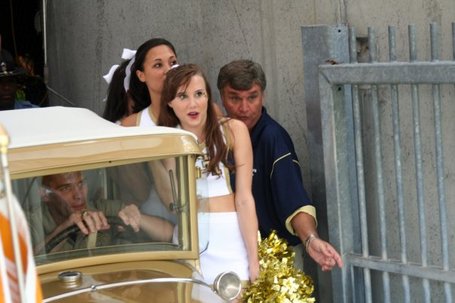 I don't know what's better...hearing Paul Johnson yell at me or watch the cheerleading/pregame coordinator stop suddenly because it was Paul Johnson who said to go.

It was a sink or swim moment when CPJ got in my ear and of course I turned right out of the tunnel (not an incorrect left turn). I didn't have time to think, I just reacted and 9 months of driving all over the state kicked in and immediately took over. I knew exactly how the car rode. What was there to be nervous about? For the rest of 2009, I had a large number of people call out to me at football games, on the street, anywhere they saw the Reck, "What do you do when Paul Johnson says go?!" Naturally, you go! Bird picked the right word when he says "breathtaking". The entire season was full of memories similar to this game but they all had their singularities.

The rest, as they say, is history. So good luck to the new Driver of the Ramblin' Reck for 2010. It was a great time for both Bird and myself and we hope that 2010 and the remaining future years bring the same amount of happiness.

Want the Reck at your event? Email the new Reck Driver, Austin Berry at RamblinReckDriver [at] gmail [dot] com. What are your favorite Ramblin' Reck stories?