This week's theme is admitting that your team is flawed, accepting this fact, and moving forward. I'm gonna highlight the best answers from the responses below:

FTRS: Enough with the MVP's and the National Title Talk... What ACC teams are going to be bowl eligible by November? Who will be left out in the cold?

Since Gobbler Country literally answered with a series of Guns 'N Roses Youtube Clips, his answers were not necessarily tallied in these results but were still noted. BC, Clemson, FSU, GT, Miami, and VT were unanimous picks. NC State and Maryland were fringe bowl teams. Brendan From Old Virginia says this about the bottom feeders of the ACC:

On the flip side, forget about Duke, and despite 2-0 starts, I'm not sold on Wake, NC State, or Maryland yet. UNC - at this point, Lindsey Lohan on amphetamines would be more predictable than UNC's season. Forget it, I'm not making any calls on that one.

Virginia Tech's, of course. Even after the Boise loss, I was sold on Tech being an ACC contender and maybe winning another BCS bowl. Teams that lose to James Madison rarely do that. They could come back, definitely, but they now need to prove that they're a legitimate conference contender.

Jim Young is busy putting his CP7 for Heisman paraphernalia in the bonfire outside the ACC Offices...

I’m planning to burn my CP7 for Heisman notepad in effigy after his performance in Norman. Here are the numbers: 11-of-28, 113 yards, no TDs, 2 interceptions. By the way, Utah State’s QB threw for 346 yards and two scores the previous week against the Sooners. Where’s my Diondre Borel for Heisman notepad?

Brandon Rink thinks Clemson has the formula down pat...

If I’m scheduling, I take the Clemson approach of scheduling in-state, okay but not great FCS teams. Now, Virginia Tech scheduled their I-81 Commonwealth compadre in James Madison, but the Dukes were certainly no flukes (alliteration and rhyming FTW!). Virginia Tech really seemed to have scheduling issues in 2010 as you have James Madison 5 days after Boise – and the fact that Beamer didn’t know about all of the returning starters for the Broncos upon agreeing on the Labor Day matchup.

Brian Favat has a lot of good ideas concerning future ACC scheduling, he truncated them down for this particular question...

In a word, no. Scheduling a I-AA opponent the first week of the season is all risk, no reward. It gives that program the entire offseason to prepare for what amounts to their program's Super Bowl, as they stand to earn their 15 minutes of "Appalachian State-esque fame" if they pull off the upset. Ideally, the I-AA game should be scheduled for the third or fourth game of the season, tucked away between a winnable game against a BCS opponent and the start of ACC play. The league should really just follow my 5-step guide to avoiding another ACC football colossal FAIL weekend. And if you insist on scheduling an I-AA opponent to start the season, find yourself a team nicknamed the "Blue Hose." And avoid like the plague any program from the CAA South not named Towson.

It really isn’t, in my opinion. If you’re trying to schedule a guaranteed W, SCHEDULE A GUARANTEED W. Because outside of the FCS honks (Darren Gant, where are you?), no one views a FCS team on your schedule as anything other than a guaranteed win, regardless of how many FCS titles they may have won. It’s not really fair to great FCS coaches like Jerry Moore at Appalachian who have built a premier program but now there’s no one who will play them, but thems the breaks for beating Michigan in the Big House. FCS opponents should be selected by BCS teams based almost exclusively on a team’s ability to manhandle them with their second teamers.

Bud Elliot and TN have harped on scheduling for years stating SOS isn't nearly as important as simply winning. Bud's thoughts on the subject mirror BCI's...

The ACC had a record five teams ranked in the preseason Top 20. This week -- just one, 1-1 Miami at number 17. After two weeks, the league could still have all five of those teams ranked in the Top 25 if they scheduled like the SEC and didn't schedule like they had something to prove.

FTRS: Have your expectations for the 2010 season or your team's place in the ACC changed after Week 2's round of games?

Obviously, this varies wildly amongst the different members of the Roundtable. Guys in the bottom end of the preseason predictions are ecstatic about the fall of the upper echelon ACC teams while guys in the top of the ACC are more or less sad. Winfield says it best...

Expectations have adjusted closer to reality. Refer to this graph: 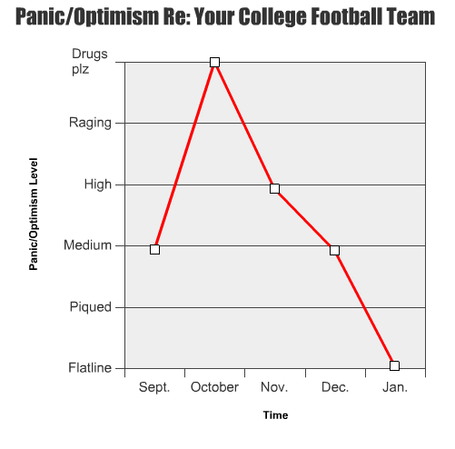 FTRS: What's a bigger mismatch: You vs. Ralph Friedgen in a competitive eating matchup or the Iron Dukes versus Nick Saban on Saturday?

Duke is a 23 point underdog according to Favat @ BCI. And most bloggers agree they have a BETTER chance against the Fridge than the Iron Dukes have against the Crimson Tide. Here's what the spread would be in multiple eating competitions featuring Ralph Friedgen vs. the World: