A recap of Georgia Tech-Kansas

Share All sharing options for: A recap of Georgia Tech-Kansas

We've let the dust settle. It took a good three days but it has finally subsided. Today, we're recapping the Kansas game and how the Kansas Jayhawks defeated the Yellow Jackets. I usually don't recap right away because I've gotta wait for ramblinwreck.com to publish the box score. I watch the NFL on Sunday so that's kinda my brain's day to relax. Then, I write my thoughts up on Monday morning for a Tuesday post. It's still fresh and the emotion has kinda worn off.

First off, let's look at what the Jayhawks did against us defensively. According to Owen Kemp at Rock Chalk, the Jayhawks used a version of the 3-3-5 to balance their defense and more importantly to prevent the big plays on the edge. Here's a graph on how our A-backs, B-backs, and Quarterbacks yards per carry changed throughout the progression of the game. To me, it appeared Kansas focused all of their efforts towards stopping Nesbitt and Allen at the LOS and kinda fending off the chop blocks on the edge as the A-Backs almost always got their yards. 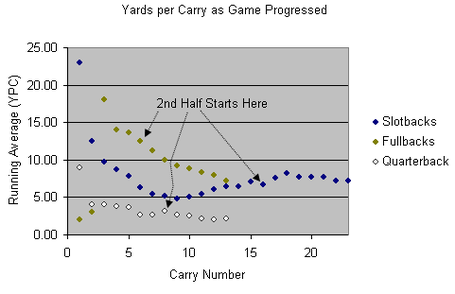 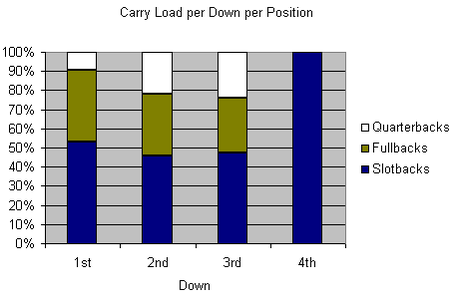 For me, there were three things that killed us: penalties, third down conversions, and field position. In 2009, Georgia Tech averaged 47 yards in penalties per game. Against Kansas, we managed 9 penalties totaling 91 yards. Tell me if these box score lines mean anything to you:

The first penalty extended a stalled out Kansas offense until we fortunately intercepted Webb on the GT 32. The second penalty was followed by Kansas' go ahead and eventual winning touchdown rather than a 4th and 6 punt. I am merely pointing these penalties out because they were exceedingly frustrating, to me (probably moreso to CPJ). Some might even call them SUPER LAME penalties.

Concerning 3rd down conversions, Georgia Tech wrote the book on converting third downs. CPJ's offense is supposed to create manageable third downs with well executed first and second downs. Kansas' off-color defense really threw the Jackets for a loop and prevented consistency from drive to drive. It was boom or bust. Exactly 50% of our plays netted 3 yards or less (31% of them didn't net any yards at all). Converting only 4 of 13 third down attempts was the 4th worst conversion percentage in a game since CPJ's been at Tech.

Ultimately, miscues, penalties, and inconsistent offensive execution seem to be the theme for our loss. Hopefully, we can iron out some wrinkles for the North Carolina Tar Heels and rebound as ACC play begins. I will look at some defensive stats later this week. Any thoughts?