Best and Worst Case Scenarios for Every Team in the ACC

Share All sharing options for: Best and Worst Case Scenarios for Every Team in the ACC

I have always heard that the best indicator of how good your season will be is typically based on how your previous season went. This is a core philosophy amongst all major football predictions. Drastic change from year to year is a statistical abnormality when compared to gradual change. If you don't believe me, then check out the following chart. 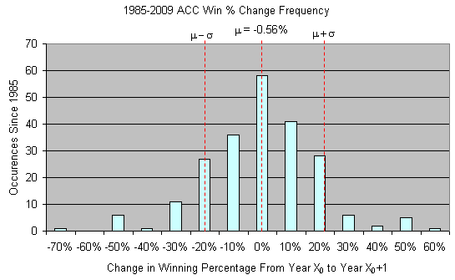 What I wanted to tackle today moreso related to teams on an individual basis not the league itself (i.e. What should teams expect from their season?). I went through and created a table that shows the worst ACC collapses and rebounds since 1985. The table will show the year of the best rebound(s) and worst collapse(s) for each team since 1985. BC, FSU, Miami, and VT don't have as many years as everyone but I still included them just for the heck of it. The final two columns show the best and worst case scenarios based on each team's 1985-2009 ACC history.

Essentially, teams have created statistical ceilings and basements based on their past seasons. If we used the ACC's history from 1985-2009, then some teams may be disappointed. A team like FSU whose fan base is expecting BCS berths, ACC Titles, etc. from Jimbo in year 1 is looking at a statistical long shot. An Atlantic Title has required ~6 wins since 2005. This would be an increase in winning percentage for FSU of 25% (a feat that's only been accomplished 39 times in 223 teams' seasons since 1985). Since GT joined the ACC, new coaches have only improved upon their predecessor's final ACC season by ~8% (almost an extra win). If FSU won 6 ACC games in 2010, it'd be the greatest conference record rebound in school history.

I am ready for football so this speculation can end...