ACC History in Numbers: Out of Conference Success?

Share All sharing options for: ACC History in Numbers: Out of Conference Success?

GTNate has been on a quest to find out why the ACC of the 90's was or was not necessarily hyped like the SEC of modern times. I think I have found some evidence as to why it may have been merely FSU and a pack of strays in the 90's. The above chart and all of the data in this write up come from the years 1953-2009.

Back to the point. Nate asked why the ACC wasn't perceived as an ass-kicking topnotch conference in the 1990's when GT, FSU, and UVA were stompin' on our opponents. Well, the answer is simple. The rest of the conference wasn't doing anything. When WVU was dominating the Big East and winning BCS games, did this help the Big East reputation? Not really. The conference was still perceived negatively. To further illustrate my point, check out the graph below of OOC win percentages against modern BCS conference teams: 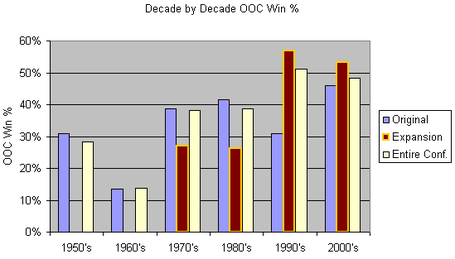 For some more interesting facts about ACC OOC scheduling, I broke down the ACC schedules all time based on modern conferences played. The leader was obviously the SEC as the ACC and SEC have matched up over 500 times since 1953. The secondmost is the Big East at just over 200. Here's the breakdown of records: 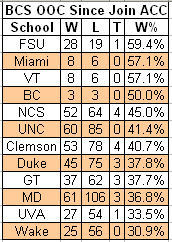 Feel free to add on, if you feel you have more pertinent info.