Which ACC team has the toughest road to Charlotte?

Share All sharing options for: Which ACC team has the toughest road to Charlotte?

It's kinda become my rule to use ACC records from 2005-2009 as a sort of defined cut off point. It gives me a non-arbitrary point to start that's not too far away and not necessarily fresh off the presses. The fully expanded ACC also provides us the division splits and ACC Championship Game, which I think has been fairly successful in keeping people interested in ACC football all the way through November. I also enjoy the insight from VT and BC fans when it comes to discussing ACC football.

The title of the story refers to the road to Charlotte's 2010 ACC Championship Game. And I thought it'd be interesting to look into the recent history of ACC homefield advantages and ACC road warriors to see which teams really have the easiest/toughest road to Charlotte. So, here's a quick look at which teams historically are the best and worst on the road and at home.

There are no surprises in there. VT's tied with Tech for the best home winning percentage in post-expansion ACC play. Since expansion, GT is the only team to rack up two undefeated home seasons in ACC play. VT, in contrast, is the only ACC team to rack up two undefeated road seasons in ACC play since 2005. From 2005-2009, there have only been 6 teams go undefeated at home in ACC play while there have been 9 teams to have lost all of their ACC road games in a season. The home field advantage is definitely present in the ACC as the home team holds a 138-102 advantage over road teams since expansion. 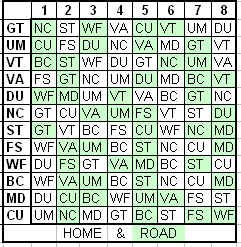 After compiling all the home/road wins for each team from 2005-2009, the next step was to look at this season's ACC schedule. The matrix above shows each ACC team's opponent for each week of the ACC schedule (green highlight means road game). Tech's trips to Clemson, VT, UNC, and Wake make Tech's road schedule the 2nd most difficult in the ACC just behind Duke's (based on each team's post-expansion home winning percentage). Duke has to travel to Wake, Maryland, GT, and VT and unfortunately doesn't have a schedule that includes playing Duke (an SOS bomb).

We know you've all been griping about the home schedule. Hell, even I have been. Sadly, I'm here to throw more gas on the fire by telling you that Georgia Tech has the easiest home slate of all ACC teams (based on our home opponents' ACC road records). It's such an easy schedule at home that it makes our overall schedule the 3rd easiest in the ACC behind Maryland and VT (tied for easiest). Here's a look at the schedule rankings (1 is easy, 12 is hard): 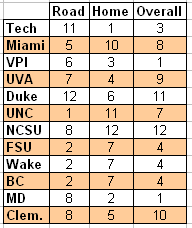 Before you go freakin' out and worrying about Tech's chances relative to VT, remember that the strength of schedule is a function not only of who is on your schedule but also who is not on your schedule. VT's schedule doesn't include VT (the best team from 2005-2009). GT's doesn't include GT and so on. So better teams are going to have "easier" schedules. Maryland just lucked out missing GT and VT on their schedule this year while NC State got the proverbial Swofford pimp slap by picking up GT/Clemson on the road and BC/VT at home.