Share All sharing options for: ACC Alums in the NFL Coaching Ranks

Maryland blogger, Patrick Stevens, wrote up a piece listing all of the alums of ACC institutions in the college coaching ranks. I was interested in seeing the list of ACC alums in the NFL coaching ranks so I looked it up. First off, Ken Whisenhunt is the only ACC alum that's a head coach in the NFL. Mike Tice is the only other active NFL coach that has head coached an NFL squad and attended an ACC school. Tice played QB at Maryland. Here's a breakdown of the big whigs from ACC schools in the NFL:

All 12 ACC schools are represented in the NFL coaching ranks. 26 of the 32 teams feature a coach that attended an ACC school (I'm pretty positive the only comparable conferences in this regard are the Ivy League and the Big 10). Maryland has the most coaches in the NFL at 7 total. The Terrapins must have a helluva strength and conditioning program as three different NFL teams feature Terps at the strength and conditioning position. UVA and Wake have one coach a piece in the NFL. Here's the list of NFL coaching underlings from ACC schools: 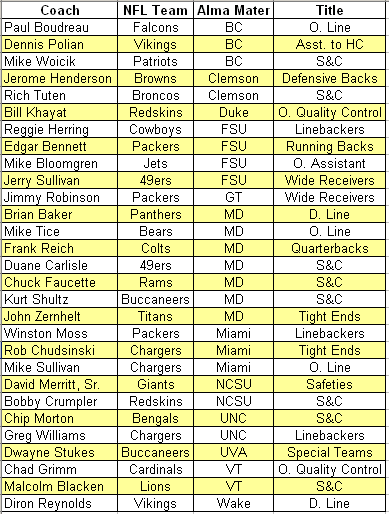 ACC fans, did I miss anyone?