Of all the questions that have been brought up during Spring Camp, I think this is the easiest to answer. Yes, Anthony Allen can replace Jonathan Dwyer at B-Back. Allen was listed last season at 6'0", 231 lbs while Dwyer was the same height and four pounds heavier meaning Allen has the size to take and deliver punishment. We've also seen that Allen has the speed once he finds the holes in the defense.

As we all know, physical skills don't mean jack if you don't have the intangibles. Does the coach trust the B-back enough not to fumble, pick up extra yardage, or sacrifice himself in key pass blocks? According to past data, Paul Johnson hasn't had many B-backs that he's trusted like Jonathan Dwyer. From 2005-2007, Navy struggled to find a feature B-back as Adam Ballard and Eric Kettani fought back and forth for CPJ's feature position. 2004's version of Kyle Eckel was the last B-back that Paul Johnson invested a majority of the carries in before he came to Georgia Tech and found Jon Dwyer. Check out the chart (2004-2007 is Navy, 2008-2009 is GT): 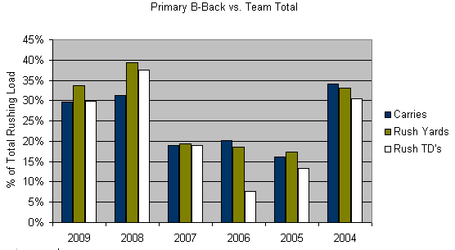 And because I really enjoy showing the transition from Chan to Paul Johnson, I came up with some more data showing how the feature back position has really changed at Georgia Tech. Tashard Choice and P.J. Daniels are two of my favorite all time GT players so I pulled their rushing totals from the stats archives. P.J. averaged just short of 5 yards per carry and scored a TD 3.31% of his rushes. Deuce averaged 5.6 yards per carry but really had a good nose for the end zone scoring on 4.15% of his carries. Jon Dwyer rushed for an amazing 6.2 yards per carry and scored on 6.77% of his carries. Dwyer and Choice only turned the football over every 140 touches (Daniels once every 111). 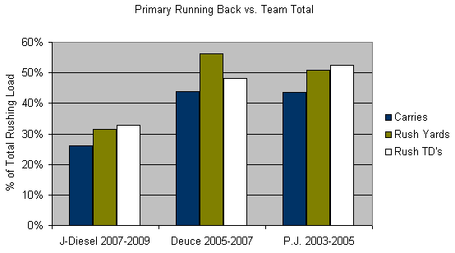 Unfortunately, Dwyer is struggling in the preseason but hopefully we'll see him come out the funk. Tashard Choice has become a staple in the Cowboys locker room. Will Anthony Allen provide Tech a fourth consecutive feature back taken in the NFL Draft? Will Anthony Allen pick up where Dwyer left off with back to back 1,395 yard seasons? Any thoughts?