How big are the shoes left behind by Demaryius Thomas?

Share All sharing options for: How big are the shoes left behind by Demaryius Thomas?

To answer the question above, Thomas' shoes are very big. And it's gonna take a helluvan effort to fill them. Stephen Hill is following up one of the most prolific wide receivers in Georgia Tech history. Thomas' 120 receptions ranks him as the 7th best Tech receiver all time in terms of career catches but Thomas is more noted for what he did after the catch. With 15 career touchdowns and 2,339 career receiving yards, Thomas ascended to fourth all time in both categories amongst all time Tech receivers. Thomas' career average of 19.5 yards per catch is the second best in Tech history while his 2009 average of 25.1 yards per catch ranks as the best Georgia Tech single season yards per catch average ever.

Looking back at Tech's last three prolific starting receivers, Demaryius Thomas, Calvin Johnson, and Jonathan Smith, we see a steady increase in production from all three and a shift in philosophies from O'Leary to Johnson. O'Leary spread the ball around. Gailey had 2 feature receivers each season who caught a vast majority of the passes. And CPJ threw over 50% of the passes to one player over the past two seasons. It's no surprise seeing the following chart, which details the percentage of receiving offense Thomas, Johnson, and Smith accounted for amongst our receiving corps. 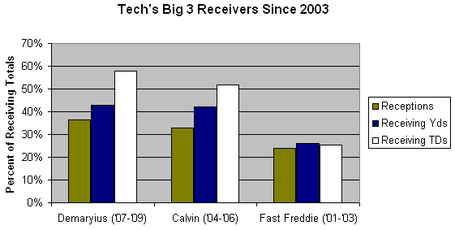 The ACC's Wide Receiver Draft History indicates that only 17 wide receivers have been drafted since full expansion. There were only four first rounders (Thomas, Johnson, Darius Heyward-Bey, and Hakeem Nicks). The fact that GT's offense has featured some of the premier ACC receiver talent since expansion makes the following graph less insane:

Tech has successfully recruited and implemented incredibly talented wide receivers. Since full expansion, Tech's two superstar receivers have won the ACC receiving title three times in five years and have earned $30.7 million dollars in NFL cash. Those are the shoes that Stephen Hill has to fill. Arguably, no other receiver or skill position player in the ACC has bigger shoes to fill than Stephen Hill.