The Tale of The Transitioning D

Share All sharing options for: The Tale of The Transitioning D

I wrote up a couple pieces a few months back showing what Tech fans should expect from Al Groh's linebackers and defensive line. Two field experts on the 3-4 told us about Al Groh's personal philosophies and gave us in depth knowledge into the nuts and bolts of the 3-4. I even broke down what we should expect as far as transitioning from a defensive line pass rush to a linebacker heavy pass rush. And the last post I noted there, which detailed linebackers racking up sacks versus D linemen, is what I'll be focusing on today. I wanted to peel back four or five years of tackling data and send you on a journey through the last two Tenuta years, Wommack's two years at Tech, and Al Groh's last two years...

The goal today is to kinda prep everyone statistically and visually for what we should be seeing in a fully functioning 3-4 defense. In short, who should be making the tackles and who should be eating up blockers? This is a simple graphic illustrating the percentage of tackles racked up by Jon Tenuta's primary starters and backups from 2006-2007. This was an era dominated by Philip Wheeler in the middle and some nasty defensive linemen in Joe Anoai, Adamm Oliver, and Michael Johnson. The linebackers were expected to make about 30% of the tackles, the line made 27%, and the secondary was expected to pick up 43% of the tackles. Good tackling safeties were a must. 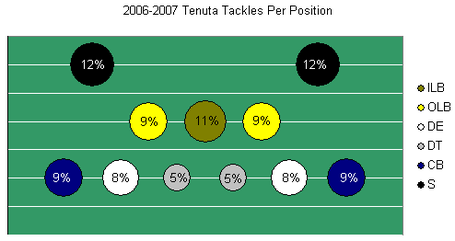 As we transitioned into the Wommack years, I think the diesels on defensive line really carried the team in 2008. Unfortunately, there's a pretty big drop off in defensive line production over this two year span. The line only accounted for 23% of the meaningful tackles, the linebackers picked up 31%, and the secondary increased to 46%. If we removed 2008 from those two years, the D line only accounted for 20% of the defense's tackles. I don't want to beat the dead horse anymore than I have to but I'd really like to explain these percentages in more tangible numbers. Basically, the defensive line went from making ~12 tackles per game under Tenuta to roughly ~8 tackles per game in Wommack's last season. Here's a look at Wommack's D in the CPJ era: 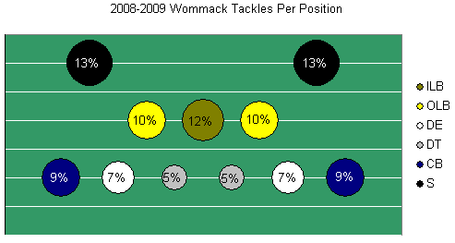 Now, the Grohfense data is gonna be pulled from the last years at UVA (2008-2009). We already know the outside linebackers are gonna rack up sacks and tackles for loss as the job of pass rushing is no longer the primary job of the defensive ends. And whoever is dubbed the "Human Ton" better expect a lot of tackles this season as the nose tackle position racked up about 14% of the Grohfense's tackles from 2008-2009. Check out the visual aid: 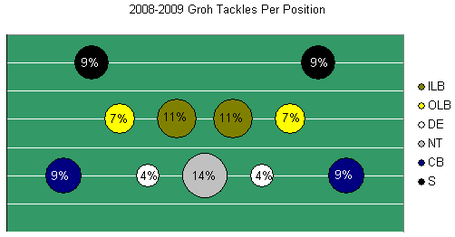 I understand two years isn't a very long time and a single player (e.g. Philip Wheeler) can totally skew the data but I think that we can still pull some ideas from these charts. Obviously, the 3-4 relies heavily on the nose tackle. Obviously, we had some struggles at defensive line last season. And finally, I think any sane person would hope we'll see marked improvement from our secondary under Groh if our linebackers can apply more pressure to the QB this season than our DL did last season. Any thoughts?