Where I Come From: Most Memorable Moments

Share All sharing options for: Where I Come From: Most Memorable Moments

As with any off season, we've produced a lot of lists this season (best wins, worst wins, best losses, worst losses, etc.). In today's edition of Where I Come From, I wanna touch on some memorable moments in my Georgia Tech Sports fandom.

September 11th, 2004
Calvin Johnson caught his 8th reception of the day, an 11 yard touchdown pass with 16 seconds remaining in the game. Georgia Tech beat Clemson 28-24 on that day. The moment was great in itself but I want to talk about what happened way up in our upper deck nose bleed section.

I was a second year at Tech. We had decided to make the 2 hour trek to Clemson. I had never been to a road game. I rode with a buddy from Georgia State. I wore a Navy Nike "Ramblin' Wreck" shirt after explicitly telling everyone to wear gold.

We tailgated at the YMCA with all of the other Tech fans. I don't remember the tailgate. I just remember the long walk to Death Valley from our tailgate. We endured hours of torment from the Clemson fans surrounding us particularly when Clemson running backs would break free for 50 yard touchdowns twice in the game. However, at the 16 second mark, when the throw was launched and the catch was made, the yellow in our section erupted and the orange quickly vacated. Tech fans were throwing nachos and cups and debris in the air like it was our job. There were high fives all around and we marched all the way back to the YMCA lot singing Up With the White and Gold and Ramblin' Wreck. It was a great day to be a Yellow Jacket Fan and a terrible day for the Purple and Orange Nation.

The moment is memorable because it cemented a group of Tech fans. We all collectively came to the realization that we needed football games less for the entertainment but more so because the event provided a substrate for pure unadulterated camaraderie.

January 1, 2007
There are only three times I have ever high-fived my Dad. The first time was on October 14, 1992 when Bream was SAFE. The second time was on April 3, 2004 when Bynum hit the layup to put Tech over Oklahoma State and in to the National Championship. The third time was when Taylor Bennett made his second ever start for the Old Gold.

In 2006, I had started taking my parents to games because I wanted them to see why I didn't come home on the weekends during football season. I had also started politicking to become Ramblin' Reck Driver and I wanted them to understand what the importance of the Reck was to the fan base. The 2006 season had a lot of comebacks and was just an exciting season to be a Tech fan so it hooked my Dad big time.

For New Years, I stayed at my parents' house and my little brother, my Dad, and myself watched the Gator Bowl. Reggie had been suspended for the game but WVU had one of the worst pass defenses that season. Taylor threw deep ball after deep ball to Calvin. Every time Calvin caught a TD, I would have high five my Dad and my little brother. It was a good time. A Hallmark moment. Even though we lost, it was still an awesome first half.

John Bird made the key play of Georgia Tech's home opener at 3 a.m. That's when Bird ran to Wal-Mart to buy the fuses needed to finish repairs on the Rambling Wreck.

He finished at 4, got two hours of sleep, then sneaked the 1930 Model A Ford into Bobby Dodd Stadium. The first the fans saw of it was at 1:32 p.m., the gold coupe looking as good as old as Bird drove through an "Our Ford is better than Samford" banner to lead the Yellow Jackets onto the football field.

So ended Saturday's one bit of suspense. Yes, the Wreck had indeed recovered from its June accident in time to motor through its ritual pregame drive.

That was on the cover of the AJC on Sunday morning with a picture of the Reck driving on Grant Field. The fuses kept blowing every time we did anything electrical besides starting the car. Four of us went to Wal-Mart in Austell that night - one Reck Club alumni, the current Reck Driver, a former Reck Driver, and the future Reck Driver. We bought every fuse we could find and left Wal Mart. I disconnected the horn and lights for the game because we didn't have time to find the short.


Jack Wilkinson wrote a piece for Ramblin Wreck.Com about the ride out as well. Of all the rideouts, it's the only one I remember vividly. Buzz was bouncing up and down in the tunnel and I had to tell him to chill out on the suspension. I remember the banner ripping away from the front windshield revealing an ocean of people. Then, there was the roar of the crowd. 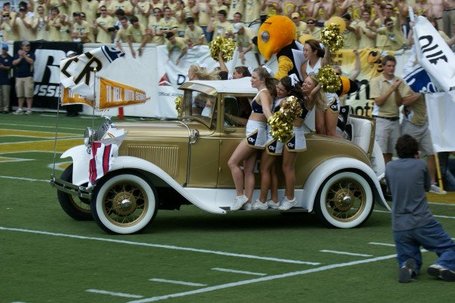 After the game, the first person I saw was my Mom. Her and my little brother rode in the rumble seat back to the GT Hotel parking garage so I could drop them off. My Dad rode shotgun taking pictures. After all of the work we had put in restoring that car, it was incredibly fulfilling to hear the positive fans as we drove past them on Techwood Drive. Definitely a day I will never forget.