Where I Come From: Tailgating Traditions

Share All sharing options for: Where I Come From: Tailgating Traditions

Today, I want to spark up discussion regarding tailgating traditions. I don't really do the cooking at tailgates. As Jerry would say, "John eats beef, ketchup, and olives." I'll admit I have a simple pallet. I let everyone else do the cooking. I do, however, have a special regimen for tailgating. Here's what I do every game day: 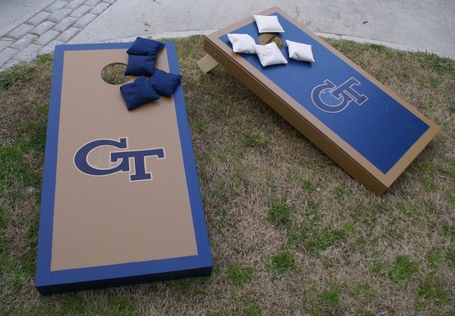 Game of Choice - Cornhole
The State of South Carolina is flooded with Ohionions and other Midwestern defectors that fled their failing economies. One of the games I learned from the Ohionions was cornhole. Not only did they teach me the game, they taught me how to dominate. I think I have a 95-96% winning percentage within 100 feet of the IC building (our tailgating area). The cornhole boards above are the boards custom built by a coworker of my Dad's. They've served us well for two full GT football and Braves seasons. Some of our more feminine tailgating companions are responsible for sewing the broken bags because DUST IS A MUST. You can't lose that good corn.

Mixed Drink of Choice - Jack Daniels and Coca-Cola
Beer of Choice - Sweetwater Georgia Brown
Intoxication is always indirectly proportional to the intensity and importance of the day's match up. Early kickoff games (e.g. SC State, Duke, and Kansas), for me, involve more mingling and social drinking. So I'll drink a few mixed drinks just to take the edge off and make the game pass by faster. Attention is only really necessary for the first one and a half quarters.

If the game is similar to Virginia Tech in 2009 or a road game in a hostile environment like Death Valley, I typically stick to Sweetwater or Sam Adams just so I can be as aware and attentive as possible. As Jerry likes to say, "You are one paranoid SOB!" He's right. If I'm about to watch a high intensity football game, I'm on edge. There's electricity in the air and I want to absorb all of it. Not forget it in some wasted stupor.

Food of Choice - Pregame: Grilled Meat; In Game: Salted Pretzel; Post Game: A Willy's Burrito
One of our tailgating compatriots (Brendan of World Cup fame) takes care of the grilling. He is the official Grill Master of our tailgate and always does a wonderful job on the meat. As long as I get a good hamburger or chicken breast before the game, I'm good as gold. Every GT sporting event, for me, involves the purchasing of a large salted pretzel. Salted pretzels, to me, are what large crowds, high fives, and F-16 flyovers taste like. After every Georgia Tech game, I get a Willy's Burrito. It's the best postgame meal ever because it's cheap, fresh, delicious, and not available in South Carolina.

What are your tailgate traditions? Do you have any special meals you prepare for each game???