Why it was bad: It was a tale of offensive cripple fights. Neither team generated much offense (MD: 253 yards vs. GT:228 yards) and a total of 5 turnovers were committed. Additionally, it lacked the excitement of scoring. Maryland put up a field goal in the late third quarter and it looked as if that was all that was needed to seal the victory. Fortunately, Reggie Ball connected to Jonathan Smith in the early 4th quarter for a touchdown to snatch back the lead and the Yellow Jacket defense was able to hold on for the win.

Why it was bad: Tony Hollings, the nation's leading rusher at 158 yards per game, injured his knee so badly during garbage time that he was out for the season. He never played football for the Yellow Jackets again. He later became academically ineligible and in 2003, he entered the 2003 NFL Supplemental Draft. The Jackets went 4-5 the remainder of the year and finished 7-6 overall.

Why it was bad: We needed Reggie Ball to dive into the endzone to beat a 1-4 Vanderbilt team in overtime.

Why it was bad: The Yellow Jackets needed a win against a 1-9 Carolina team to clinch the Coastal Division. What we got was a victory but almost died of several heart attacks throughout the game. With the power of Tashard Choice, Calvin Johnson, and Reggie Ball, Tech managed a measly seven points and needed a defensive stand in the 4th quarter to keep the win.

Why it was bad: BECAUSE EVERYTHING WAS BAD! Fall Break, no crowd, 3rd string quarterback. We needed to block a field goal to keep the game from going to overtime. Basically, we just rolled over and somehow still won. Quietest crowd I have ever witnessed after a ballgame. 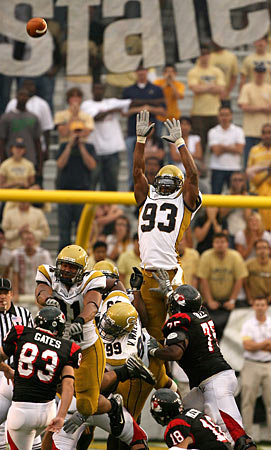