The 4th Down Experiment

Share All sharing options for: The 4th Down Experiment

Yesterday, loyal reader/friend of Winfield's/acquaintance of mine asked for data pertaining to CPJ's tendency to go for it on 4th down. So let's cover the basics. CPJ goes for it a good bit. Last season, we led the ACC in total 4th down conversion attempts and had the 3rd best conversion percentage. We like to go for it. In fact, only five teams went for it on fourth down more than us last season. And what made things interesting for Tech fans was that CPJ got more and more aggressive as the season progressed: 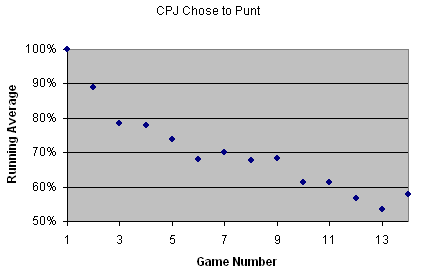 And why shouldn't Paul Johnson become aggressive? According to the numbers, we were converting 54% of the attempts under 6 yards to go. The only time we really struggled to attain a first down on fourth down was in crazy long yardage situations. Check out the chart:

Ultimately there were only really three bad fourth down plays last season (excluding the safety at Miami). Two were desparation heaves against Miami and Georgie and the third was a totally effed play against Wake. Otherwise, we never went for it on fourth down in a super crazy situation. Reflecting on the situations from a statistical perspective shows that CPJ was just playing the numbers. When GT converted a fourth down in 2009, GT scored a touchdown on that drive 73% of the time. Opponents scored 10 of their 42 touchdowns against GT after receiving a punt in 2009. Basically, GT automatically conceded 1.89 points every time we punted. Conversely, we only gave up three field goals and a touchdown on drives where we gave the opponent the football on downs (1.45 points per proceeding drive). This doesn't account for field position or long term strategy within a game but who's really worried about that stuff? Not me.

Any questions? Comments and suggestions for future stat write ups are welcome.