Did the GT offense mature from year 1 to year 2?

Share All sharing options for: Did the GT offense mature from year 1 to year 2?

Any sane football fan can tell you that the Georgia Tech offense was a much more reliable machine in 2009 than in 2008. Most sane football fans, however, don't realize how much more efficiency the offense acquired from year 1 to year 2 under CPJ. The most noticeable change in the offense was the increase in scoring opportunities. In 2008, GT ran 130 legit offensive drives. Only 56 of those drives (43%) resulted in a field goal attempt or touchdown. In 2009, we racked up 145 legit drives and made a field goal attempt or scored a touchdown 78 times (54%) of the time. Check out the chart:

Our better execution is definitely evident in the numbers. We reduced our turnover rate by 7.8% and increased our touchdown to field goal attempt ratio by 49%. This may be attributable to the sometimes erratic Scott Blair but I'd like to believe it's because CPJ's back-breaking 15 play drives cripple a defense's will in the red zone.

The original point of this piece was to display an increase in efficiency from 2008 to 2009. I came up with some fancy charts to show how often a drive results in a given result based on the play count. Hopefully, your touchdown percentage increases as your play count increases. This was not the case in 2008: 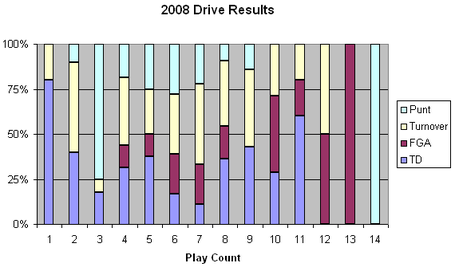 A generally erratic pattern follows the 2008 season as we'd play horribly at UNC yet execute magnificently against Miami. The 2009 season shows us a lot more uniformity and the trend most offensive tacticians would appreciate. As the play count increases in the drives, the scoring opportunities increase as well: 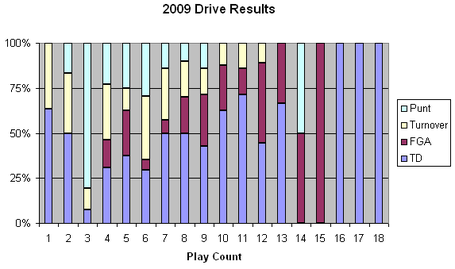 A talking point amongst many negative Nancies in the media is that opposing DC's have figured us out. However, our yards per play has stayed fairly consistent since 2008. There hasn't been a magical drop off. This is shown in the chart below: 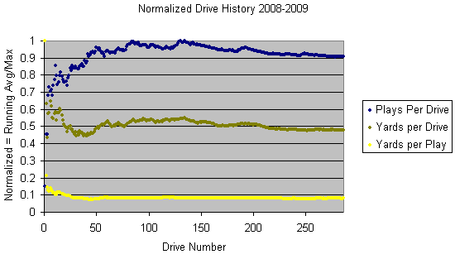 Ultimately yardage is irrelevant to CPJ and the average Tech fan. CPJ wants two things: Points and Wins. Here's all you need to know about Tech since 2008 (points per drive is normalized so it would fit on the same graph as running win percentage): 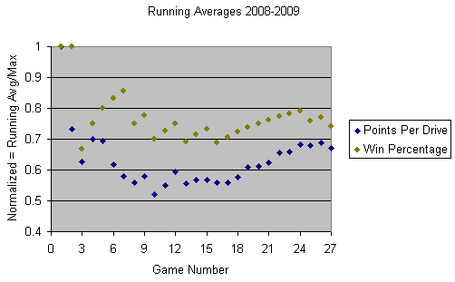 Any thoughts out there?