Margin of Hype vs. Margin of Excellence

Share All sharing options for: Margin of Hype vs. Margin of Excellence

Every year the ACC media predicts the outcome of the ACC at the July ACC Media Days. This year, the media picked VT (again) to win the ACC and why not? VT has won the Coastal 3 times. The odd part is the lovefest with the Florida schools, which have shown little to no improvement (in the conference win columns) since 2005. Here's a look at how each team has been picked to finish since 2005 (blue line) and their average finish (green dot): 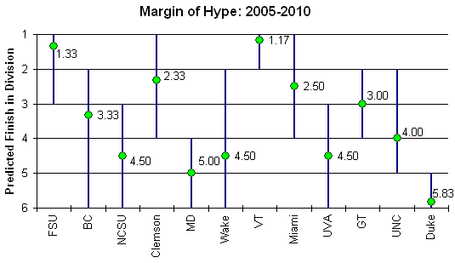 In case you were wondering, FSU and VT were picked to win the divisions last year and finished 3rd and 2nd in their divisions respectively. So picking FSU and VT is not really a surprise by our ever so predictable ACC media. VT has justified itself with a high preseason pick. FSU has not. Check out the following chart: 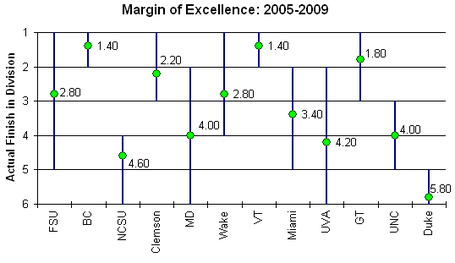 Concerning overrated versus underrated, FSU is the most overrated preseason team since 2005 followed by Miami. Boston College and Wake have consistently outperformed preseason expectations. NC State, UVA, and UNC on average have met media expectations over the course of the first five ACC Expansion Seasons.