Share All sharing options for: Reviewing the 2009 Season Preview

Last season Dane, Winfield, and myself predicted the outcomes of the September, October, and November schedules. Somehow the November preview never made it to the public eye but we wrote a preview for it. And basically, we were pretty wrong about a lot of games. The breakdown is after the jump... 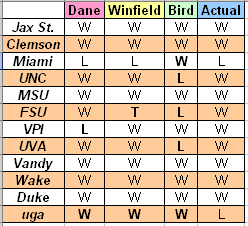 We each had a different approach to the predictions. Dane's approach netted a 10-2 final record for Georgia Tech. He assumed we'd lose to the best two teams on our schedule (Miami and VPI). Winfield was more optimistic than Dane but fearful of the homefield advantage at Doak-Campbell. I was in "Chan Gailey Mode" and terrified of trap games. I picked three losses that a Chan Gailey team would have lost (two road games plus a school from North Carolina). To me, these are the best quotes from our previews of last season:

Jax State
This was Winfield's first drive on to the field...and first firsthand experience with Paul Johnson.

What scares me most about Jax. State is me messing up my first ride out with the Ramblin’ Reck. - Winfield

My worries are similar to Winfield's in that I don't want any key players injured in a jobber game but you don't play football for fear of possibly getting injured. You play to injure other people... - Bird

The most fun part of this game? Laughing at Clemson fans after the game as they realize who the best running back in the league is. - Dane

This game shouldn't be close even though history tells us otherwise. - Bird

We really underestimated Clemson last season and I think it was attributed to not realizing C.J.'s ridiculousness and Kyle Parker's almost nonexistent learning curve.

Miami
Winfield sounded like a sage when he said the following:

Miami has athletes and with the combination of back-to-back Thursday night games, things seem to point to the likely possibility that it’s Miami’s turn to take this game. - Winfield

UNC
Dane hit the nail on the head big time with his prediction of the Tar Heel 2009 campaign and the 2009 GT-UNC game:

CPJ is going to snap Davis's proverbial wiener off like a panda breaking bamboo. When it comes down to it, most of the Tarheel's opponents outplayed them last year, but managed to blow it by playing like a bunch of dumbasses. The Heels stop getting away with football robbery and we don't hand them the game. This match is going to be the most obvious domination of all of our ACC games... well, except for Duke. - Dane

Oh noes, the SEC! This game might be difficult, if our entire team is attacked by zombies and forgets how to play football in their deathly states. However, even a team of shambling morons could probably beat them. - Dane

Florida State
Winfield and myself echo a fear of FSU's home stadium...

If we win this game, I will be incredibly happy. No matter how much luster FSU has lost, they still have a ridiculous home-field advantage. A win here, to me, means we shouldn't lose another ACC game... - Bird

I am afraid of Florida State. Whether it's still the name FSU or how we narrowly won last year, I am nervous. Doak Campbell is loud and ridiculous and I expect FSU to be an undefeated or one-loss team coming into this game as well. - Winfield

This goes to show you how bad predictions can be (or downright useless if you're CraigT). FSU was 2-3 coming in to the Tech game. I will admit that I predicted a blow out of Miami earlier to make Winfield feel better.

I think VT is the only team on our schedule that can beat us if both teams are playing their best. - Dane

Virginia Tech's season hangs on the threads of Tyrod Taylor's arm and I don't see VT sneaking past us like they did against our 2008 disorganized offense and penalty-maligned defense. Tyrod will not get the late helmet-helmet call and GT wins... - Bird

UVA
Everyone was very specific about the outcome of this game...

I think UVA is the worst team in the Coastal. They haven't progressed since last season but Sewell is back and terrible things happen in Charlottesville no matter the players that line up on the sidelines. GT loses by a possession. - Bird

Haven't won in Charlottesville since 1990. The streak ends in 2009 because Paul Johnson is not afraid of those who show up in blazers and ties and hold each other when they sing they're fight song. - Winfield

I will be very drunk and probably will be wearing a Stormtrooper costume. Or dressed up like a dead Nashville country star. Look for me carrying around a gin bucket in a little kid's trick-or-treating pumpkin pail. If there's one thing a Catholic upbringing does right it's teach you the value of a good Halloween celebration. - Dane

I don't think Dane was a Stormtrooper but I'll need some outside confirmation.

Wake always wins the perennial "thorn in your side" award. In 1999, they ruined little Joe's Heisman run. In 2006, they capped our miserable November off with a rotten cherry on top. This year, they return Riley Skinner and a slew of crusty veterans on OL as indicated by Brendan's preview. In fact, 4 out of 5 of their OL are Redshirt Seniors... Wake will be a beast in the muddy Atlantic. FTRS used our preseason media predictor to predict a WFU Atlantic Title this year and I still see that as the case. But Wake will get stopped short in ATL. As long as the fans show up and we're still on our October roll... - Bird

Georgie
Dane pretty much summed up our feelings on Georgia, which unfortunately never really came to fruition...

UGA's season will be far from a bust, but I think they are going to have alot more trouble getting their act together than people are expecting. Yeah yeah, I know, they had serious injury problems in the pre-season last year... but really, they are replacing a #1 draft pick at QB and a universally (well, except from Atlanta) hailed RB, and I'm just not willing to give them and kind Top 15 respect until they go out and prove they deserve it. With that said, we will have almost a full 2 seasons of running our offense, and this dawg team is going to look like an even bigger bunch of assholes this year without their once-in-a-lifetime QB dropping a career day's worth of passes on us to at least even things up a little. We take this game early and never look back. - Dane

Overall
Winfield was the best at predicting the season outcomes. He only really missed the Georgia game but we all missed that one. Even the dogs thought they were gonna get blown out.

I guess our surprise of the season was how good Clemson turned out to be in two losing efforts against Tech. The big non-surprises were Duke and VPI as Duke brought literally nothing to the table and VPI provided GT the toughest fought game of the season.

What games surprised you the most last season? Who was better/worse than anticipated when they lined up against Tech?