Yesterday's post featured the formative ACC days. Before the Dark Times. Before the Empire. Today, I'm diving into more recent records featuring three expansions and their importance in strengthening the conference's football presence overall within the national sports media. 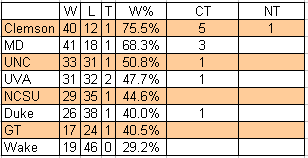 The 90's: Conference is Tomahawk Chopped 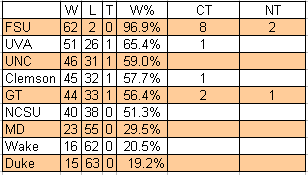 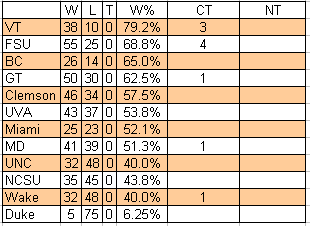 Team of the Decade: Virginia Tech Hokies
Doormat of the Decade: Duke Blue Devils
ACC Moments of the Decade: Expansion is definitely the big story of the 2000's. It has redefined how the conference operates adding in a conference title game, increased football revenues, and a shift from the Tobacco Road political core. Chris Weinke's 2000 Heisman Trophy was also in there. Duke also set the ACC record for consecutive conference losses at 30 before ending the streak in 2003.