A recent article by Phil Steele claimed VT as the ACC's team of the 2000's because of VT's dominance in terms of wins and ACC football titles. I kinda wanted to explore a little bit deeper and sort out the best teams from every decade of ACC play. So today, I'm breaking down the 1950's, 1960's, and 1970's by records and coaches. This era doesn't encompass GT's reign in the ACC so if you're a Tech fan, bare with us. The tables in each decade indicate each college's ACC record.

The 50's: Birth of a Conference 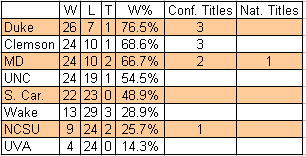 Team of the Decade: Maryland Terrapins
Doormat of the Decade: Virginia Cavaliers
ACC Moment of the Decade: The birth of the conference saw Jim Tatum's Maryland squad run off a pretty unbelievable 10-0 season. Their only loss came in the Orange Bowl to the Oklahoma Sooners. It wasn't until 1968 that polls were released after bowl games so prior to the OB the National Title was already awarded to the Terps. Unfortunately, Tatum left Maryland for UNC and contracted Rocky Mountain Fever in 1959. He passed away two seasons into his tenure at UNC at the age of 46. 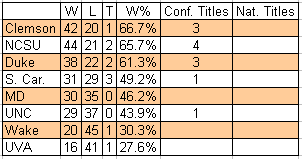 Team of the Decade: N.C. State Wolfpack
Doormat of the Decade: Virginia Cavaliers
ACC Moments of the Decade: Brian Piccolo becomes the first ACC player to lead the nation in rushing with 1,044 yards rushing in 1964. The South Carolina Gamecocks feature their highest and lowest points of their ACC tenure. In 1965, two ineligible players force the Gamecocks to forfeit all of their victories vacating their first ever ACC Title. In 1969, however, the Gamecocks won the ACC Title again and the 1969 ACC Championship is still the only flag flying at Williams-Bryce.

The 70's: Realignment Part I 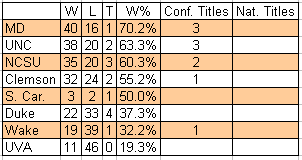 Team of the Decade: Maryland Terrapins
Doormat of the Decade: Virginia Cavaliers
ACC Moments of the Decade: South Carolina departed the ACC on bad terms in 1970. In 1974, the ACC had its first winning record out of conference since 1957 while Maryland ran off three straight ACC Titles from 1974-1976. Georgia Tech joined the conference in 1978 but would not start conference play until the 1980's.

I'll be the first to admit that I wasn't born yet during all of this so anyone that feels like filling us in on the details of this Era is more than welcome to.