You can't have light without the dark. Yesterday, we recapped the most painful memories of the past decade in the 10 (+2) worst losses of the 2000's. Today, we're gonna lighten things up for the 4th of July weekend with the 10 Best Wins of the 2000's! Woohoo! Victory! 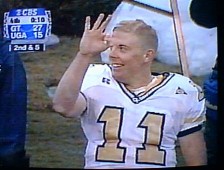 #10 November 25th, 2000. GT 27, Georgia 15.
Why it was so good: Three in a row against your arch rivals means you're in a damn good place. The game also cemented George Godsey as a fan favorite amongst the Tech faithful.

#9 September 1st, 2007. GT 33, Notre Dame 3.
Why it was so good: This game was the epitome of redemption for the 1970's GT squads. Georgia Tech's offense didn't have to really do anything in the victory as the defense utterly destroyed Charlie Weis and his new Golden Boy, Jimmy Clausen. I think if everyone really wants to look at the point at which Irish fans started turning on Charlie, it'd have to be this game.

#8(a)/(b) September 6th, 2003. GT 17, Auburn 3. September 3rd, 2005. GT 23, Auburn 14.
Why they were so good: In buildup to both games, Tech fans only heard one thing, "The SEC is gonna destroy you guys!" That didn't quite happen. The Georgia Tech defense forced seven combined turnovers in the two games. Auburn played so poorly in 2003 that they backed out of their 2004 game against Tech and magically ran the table. Tech ended their 15 game winning streak in 2005 in equally impressive fashion.

#7 November 19th, 2005. GT 14, Miami 10.
Why it was so good: Miami came into the game #3 in the country. A win would have given the Canes a spot in the first ever ACC Championship Game against FSU. A Superior Court Justice had just ordered Georgia Tech to reinstate Reuben Houston after the team had suspended him for trafficking copious amounts of marijuana. To quote Chan Gailey after the game, "These guys have a tremendous ability to compartmentalize -- put all the junk to the side and play the game. All the other stuff they can't control. What we can control is what happened out there." Warren Sapp, in an equally candid interview, said that Miami has no business losing to a bunch of "nerds" that actually "have to attend class."

#6 October 7th, 2006. GT 27, Maryland 23.
Why it was so good: Besides the fact that this was my birthday and first game I had ever taken my parents to, it was a barn burner. Poor special teams and freak plays kept Maryland alive all game as the Terps attempted to throw a monkey wrench in GT's ACC Title hopes. Al Davis had to have been watching this game as Darius Heyward-Bay took a pass from Sam Hollenbach 57 yards to the Georgia Tech 7 yard line. However, GT fans remember the 1:11 seconds after that the most. In four consecutive plays, the Georgia Tech defense pushed the Maryland offense back 15 yards featuring two huge sacks from Michael Johnson on 3rd and 4th down. 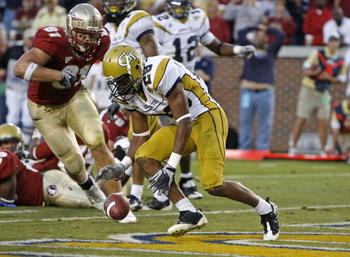 #5 November 11th, 2008. GT 31, FSU 28.
Why it was so good: The game ended Bobby Bowden's reign of terror on the Georgia Tech Yellow Jackets. And not only did it end a ~20 year old losing streak, it also featured a Maryland-esque goal line stand.

#4 November 29th, 2008. GT 45, Georgia 42.
Why it was so good: Tech hadn't beat the dogs in what felt like a generation. It was due. All Tech fans felt some slight redemption for the heartbreaks in 2005 and 2006. Not complete redemption but some. To top it off, the offense was unstoppable and amazingly fun to watch.

#3 October 17, 2009. Tech 28, VPISU 23.
Why it was so good: This game was a battle of wills: Paul Johnson versus Bud Foster. In the end, Johnson overcame Foster. In build up to the game, VPI safety Kam Chancellor told everyone that he could tell exactly what Georgia Tech's play was based on the formation and presnap motions. ESPN made a particular point of picking on Kam in the post-game highlights. The goal posts were torn down by the drunkest home crowd since Notre Dame in 2006. All the way turnt up! 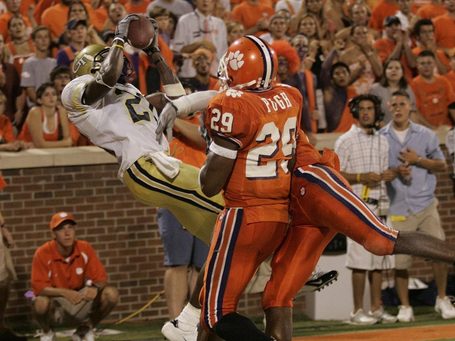 #2(a)/(b) October 28th, 2000. GT 31, Clemson 28. September 11th, 2004. GT 28, Clemson 24.
Why they were so good: 7 seconds remaining in 2000. 16 seconds left in 2004. If Clemson had run any other play completely different in either game, they would've won. Time would've expired. Each amazingly awesome comeback required the game to be played with exact chaotic precision. In 2000, George Godsey executed the perfect 2 minute drill against a vaunted Clemson pass defense. In 2004, Charlie Whitehurst had to slide inches short on 2nd down and then Yusef Kelly failed to rush for one yard on 3rd down. And then, there was the snap, muff, recovery, and birth of a legend named Calvin Johnson.

#1 December 5th, 2009. GT 39, Clemson 34.
Why it was so good: This game meant a lot to Tech fans because it brought home Georgia Tech's first outright ACC Title since 1990, Georgia Tech's first January bowl bid since 2006, and another win over the Clemson Tigers. I think this game also kinda made Tech people feel slightly better about 2006. The ice cold feeling of the game in Jacksonville melted away a little bit after Tech fans left Tampa in December.

What do you all think? Does shutting down Philip Rivers' 2002 Heisman campaign deserve mention? What about the win that ended the drought in Charlottesville or the destruction of the Hokies in Blacksburg?