Fight Song History: Origins of "Up with the White and Gold"

Share All sharing options for: Fight Song History: Origins of "Up with the White and Gold"

Every good Tech fan knows the lyrics to Tech's age old song "Up with the White and Gold." However, the origins of the song have come into question lately by a few inquisitive West Coasters, the writers of California Golden Blogs. According to Georgia Tech's archived 1919 copy of "Up with the White and Gold", the song was written by three members of Georgia Tech's Glee Club.

The issue arises now-a-days as three schools lay claim to writing the original tune and lyrics. Neither of the three seem too happy to relinquish rights to a 100 year old tradition, either. Montana's fight song "Up with Montana" has the most dubious of origins seeing as they just claim they were the first ones to pen the song. Credibility is pretty low for the University of Montana's claims seeing as bear meat is still on the menu in most Montana restaurants. Here's the Montana version:

I give it a 4 out 10 for fight songs. It has incredibly forced lyrics and appears initially to be an even tougher song to sing than Up with the White and Gold. The lines about "pigs squealing" and "tummy" did not stand the test of time.

Initial investigation into this issue led me to the Stanford Jonah article on wikipedia claiming Georgia Tech borrowed the song from Cal-Berkeley following the 1929 Rose Bowl. Well, I already knew this statement wasn't true as Tech was singing the song at least 10 years prior to the Rose Bowl. The earliest mention I found in the Blueprint was from the 1916 Blueprint, which would mean Tech men were singing the song as early as Fall of 1915. Below is a scan of the song in one of its formative versions: 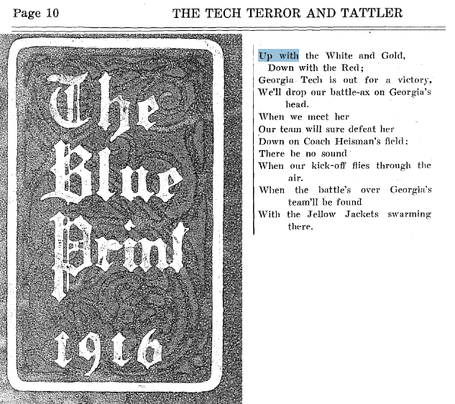 The best explanation I have heard is from the Cal-Berkeley guys over at California Golden Blogs. They say that the Cal Glee Club made an adventure to Europe in 1914 singing their version of the song "Stanford Jonah" all over the U.S. and that it's possible the Cal Glee Club stopped through Atlanta. The three men credited with the lyrics of "Up with the White and Gold" were in Tech's Glee Club from 1913-1916 and may have poached a few lyrics along with the tune. Here's the Cal version written in 1913:

When the training days are done, And the Big Game's just begun,
And there's music in the air; When our team runs on the field,
Stanford knows her fate is sealed, For the Golden Bear has left his lair.
When the yells of lusty throats Start to getting Stanford's goats,
And the rooting section seems a howling mob, Then you grab your hat and shout,
You let folks know you're about, For you know that Stanford Jonah's on the job.
Chorus
So then it's up with the Blue and Gold, Down with the Red; red, red, red
California's out for a victory, We'll drop our battle axe on Stanford's head; chop
When we meet her, our team will surely beat her. Down on the Stanford farm, there'll be no sound,
When our Oski rips through the air. Like our friend Mister Jonah, Stanford's team will be found,
In the tummy of the Golden Bear.
Chorus

Now, the reason Tech's fight songs are longer and more lyrical versus other less than creative fight songs was because Tech's Glee Club was the elite club after its 1908 founding. The Tech Glee Club traveled all over the Eastern Seaboard and performed highly publicized shows in Atlanta with either the Georgia Tech Mandolin Club or Georgia Tech Orchestra (early band). It wasn't uncommon for 100 men to try out for the 30-40 man roster of Tech's early Glee Club. And since the Glee Club (and band) leaders needed songs of musical value, they wrote the lyrically fun and boisterous fight songs that we know today in "Up with the White and Gold", the Alma Mater, and "Ramblin' Reck from Georgia Tech" to build up a school spirit-driven repertoire.

Now, any great Tech history buff would retort, "I thought Georgia Tech discontinued the Glee Club after America's entry in to World War I!" Good old-fashioned hazing replaced the Glee Club's niche in teaching incoming freshmen the fight songs. The Institution known as Freshmen Rules (or RAT rules) further provided a platform to solidify the early fight songs in the hearts of early Tech fans. Among many other rules required of incoming freshmen, all new students at Tech were required to memorize several chants and fight songs before being allowed to attend the football games. Strict social and sometimes physical retribution was incurred if new students didn't oblige the upperclassmen demands. Even though enforcement of RAT rules is considered illegal by modern law, Tech fans generally agree that knowledge of the fight songs is a rite of passage for every true Tech fan.