Where I Come From: Expectations for the Season

Share All sharing options for: Where I Come From: Expectations for the Season

This post is sponsored by EA Sports NCAA Football 2011. 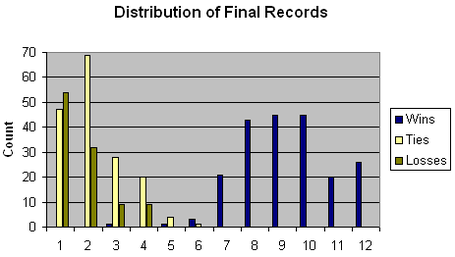 The above chart breaks down the final record of every one of the 205 voters. So I broke down each voter's submission like so: a win meant the voter predicted GT would win more than 50% of the time against an opponent, a tie meant GT would win 50% of the time, and a loss was GT would win less than 50% of the time. Out of the 2,460 games picked by the 205 voters, GT fans picked 1,904 wins (77.4% of the time). That's not too shabby. There were only 375 predicted ties and 181 losses. If each tie were considered half a loss and half a victory, then the average record for those polled was 10.2-1.79 (or for brevity's sake 10-2). Below is a breakdown on a game by game basis of all those polled:

Looking from game to game, you can see the GT base's relative confidence in the average row. South Carolina State, Middle Tennessee, Duke, and UVA all fall into the "cupcake division" according to our fan base as all four feature a <15% chance of survival against Paul Johnson. Wake, NC State, and Kansas fall into the "not-so-easy division". Miami, Clemson, UNC, and Georgia fall into the "tough division" as they probably should. And VPI is the only team that currently has a >50% chance of victory against GT amongst Tech fans polled. Here's a breakdown of how confident GT fans were against the supposed 5 toughest opponent's on our schedule: 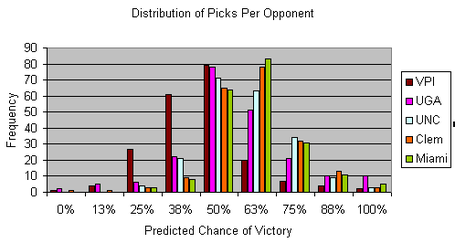 The distribution of choices is quite interesting. There's an obvious fear amongst Tech fans about going on the road to several big rivals this year. For example, Clemson without Kyle Parker and C.J. Spiller garnered a marginally lower confidence rating than Miami (a team that decimated us last year). Even the standard deviations are about equal meaning there is comparable certainty amongst the voters on their Miami/Clemson selections.

I included an optional input in the survey that included location. I just kinda wanted to gauge confidence in the season based on poller's location but knew I'd not have a whole lot of time to break down the poll. The only major correlation I found was that people within the perimeter are less confident about the Georgie game than those outside the perimeter. The standard deviation is also higher amongst Atlanta Tech fans (0.19) than Tech fans outside the City (0.15) with regards to Georgie. Only 99 fans responded with their location so these results aren't quite as thorough as the entire poll but I still found it to be an interesting tidbit.

The final nugget of trivia I'd like to present about the poll is the number 2.10%. This is the chance of going undefeated based on the combined results of all 205 Tech fans polled. If we multiply the odds of winning each game, we get the following chart showing the odds of going 1-0, 2-0...and so on to 12-0.

Even a team like Alabama that's probably favored to win all of their games big time (90%^12) would only have a ~28% chance of going undefeated. That's pretty cool, eh? What are your thoughts on the poll results? Why did certain teams gain respect in your mind even though Tech defeated them last year (UNC/Clemson) while some teams lost respect despite beating Tech (uga/Miami)?