Share All sharing options for: The 10 Worst Losses of the 2000's

#10 November 8th, 2003. Duke 41, GT 17.
Why it was so bad: Duke hadn't won an ACC game in 4 years and Georgia Tech obliged them with four Reggie Ball turnovers. Duke was fired up by Tech alum Ted Roof after the emotional termination of Carl Franks. It was a terrible day to be a Tech fan.

#9(a)/(b) November 30th, 2002. Georgia 51, GT 7. November 29th, 2003. Georgia 34, GT 17.
Why they were so bad: Mark Richt broke a 100 year old record for largest margin of victory in a Georgia win over Tech. Then, he followed it up with another decimation of Gailey's unorganized bunch in 2003. Reggie (supposedly) got into a fight with a coach on the Georgia sidelines and was suspended for the second half of the 2003 game. Both games are cited for their epic futility.

#8 September 20th, 2003. Clemson 39, GT 3.
Why it was so bad: Following a tough loss to FSU (the last good game of Chris Rix's career), Reggie Ball vowed that Georgia Tech wouldn't lose another game. Well, we did. We lost this one bad. To top it off, Tommy never pulled Charlie Whitehurst or the starting offense as Whitehurst ran one in against Tech with 3:57 remaining in the fourth quarter. 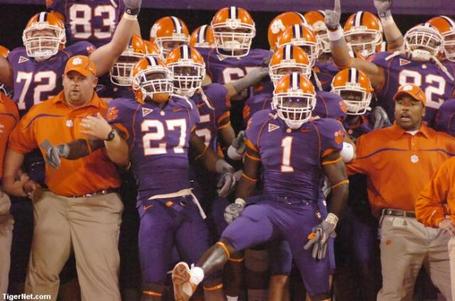 #6 September 29th, 2001. Clemson 47, GT 44.
Why it was so bad: It was an overtime loss. Everyone in the stadium knew the final play was going to be a quarterback draw except for Ted Roof and the Georgia Tech defense. Woody Dantzler scrambled into the end zone untouched from 11 yards out for the game winner. Tough freakin' break.

#5 November 26th, 2005. Georgia 14, GT 7.
Why it was so bad: Tech had just knocked off Miami. Both teams came into the game ranked for the first time in a few years. We were televised opposite a terrible Stanford-Notre Dame game so basically the whole country was watching Tech-UGA. On the final drive, Reggie scrambled 30 yards to the Georgia 22. The Tech crowd was electric in anticipation of the game tying touchdown. Instead, however, Reggie threw a pass intended for a receiver running a comeback route while his intended receiver, Damarius Bilbo, ran a post pattern. The ball flew straight into Tim Jennings' arms. Game over. 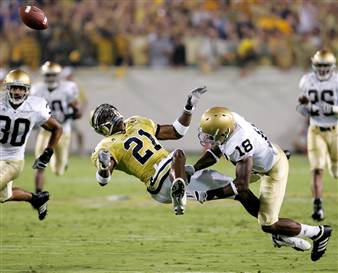 #4 September 2nd, 2006. Notre Dame 14, GT 10.
Why it was so bad: It was bad because the referee decided who won the game (check video at 2:30 mark). Both teams played a pretty epic season opener and sadly a weak sideline call protecting pretty boy Brady Quinn won the Irish their only quality win of Charlie Weis' tenure.

#3 October 6th, 2005. NC State 17, GT 14.
Why it was so bad: With 26 seconds left in the game, Superman was flawed. On a play action slant from the NCSU 2 yard line, Reggie hit Calvin in the hands. Calvin was undercut by the safety and hit high by a cornerback popping the football straight into the air. NC State's Garland Heath picked off the fluttering air ball. NC State celebrates on the field and GT fans (as usual) throw things at them.

#2(a)/(b) November 25th, 2006. Georgia 15, GT 12. November 28th, 2009. Georgia 30, GT 24.
Why they were so bad: Two coordinators held superior GT squads back. Pat Nix decided to crap his pants in 2006. And Dave Wommack had worn out his welcome in 2009. Nix was ready to leave Georgia Tech and most likely had his offer from Miami in the mail as he haphazardly called deep bombs and halfback draws in one of the worst offensive efforts of the 2000's. 2009 was much the same but on the opposite side of the ball. Wommack switched between 3-4, 3-3-5, and 4-3 all game only to have simple stretch plays obliterate his defense. The reason these two games stick out for GT fans is because they both feature Georgia squads on the heels of mediocre seasons defeating GT during epically good seasons. The word "upset" doesn't begin to describe these two games. 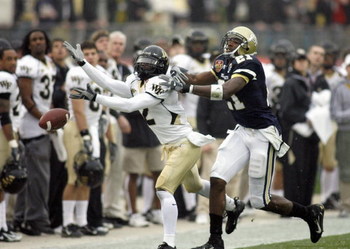 #1 December 2nd, 2006. Wake Forest 9, GT 6.
Why it was so bad: Georgia Tech fans realized that Pat Nix had truly fooled them for five years. Nix, in fact, was an agent sent from Auburn University to destroy Georgia Tech's chances at ACC glory. In a rainy, cold Jacksonville crapfest, Tech only scored 2 field goals. The offense averaged almost 27 points per ACC contest. The defense only gave up 3 field goals. Pat Nix is very fortunate he got a job with Miami because he was about to be fired.

What games do you think deserve to be on this list? Should some of the FSU close calls be included?