Saving gasoline by going to the SEC

Share All sharing options for: Saving gasoline by going to the SEC

My job (besides boring government compliance work) is to hunt down inefficient utilization of my company's various utilities. So today, I decided to look at how much gas could be saved by the Tech fan base if Tech were to move to the SEC along with FSU, Clemson, & Miami. To me, this would relegate Vanderbilt and for argument's sake Kentucky to the SEC-West. If Tech were to be allocated to the SEC-West, this whole argument is garbage. I don't think many Tech fans would be happy with a scenario that would take Clemson and Georgia off the regular schedule.

Let's start with the current ACC Coastal Slate. Currently, Tech fans have to drive about 6 hours to reach any of our Coastal opponents and Clemson (excluding the Miami drive). I purposely pulled Miami because I don't think many Tech fans make this drive. More would fly or simply not go. I think Maryland and Boston College are both outside of sane driving range as well. The chart I came up with shows you how far of a drive each current, regular ACC opponent's hometown is from Atlanta via Google Maps. It also shows how many driving hours are required to reach the destination, how many gallons of gas will be burned (20 mpg average), and how much this would cost gas-wise ($2.50/gallon).

Please note that every freakin' trip is long as Hell. 5 to 6 hour drives are the norm for Tech fans in the ACC. If Tech sent 2,000 fans to each road game and every fan carpooled with 3 other Tech fans, then Tech would be sending 500 cars to every drive-able road game (excluding pink cities). If the average gallons burned per road trip is ~35 gallons, then Tech fans would be burning up 17,500 gallons of gas every road game.

So let's look at a greener model in which Tech has joined the SEC-East. The following chart shows my system in which Tech still maintains an 8 game conference slate of all SEC-East teams (something Yakub2 and myself have been debating about the 16 team conference). Our 8 game SEC-East slate would only have one insane road trip (Miami) and 6 teams closer than every single current ACC opponent besides Clemson and Wake. Here's the chart: 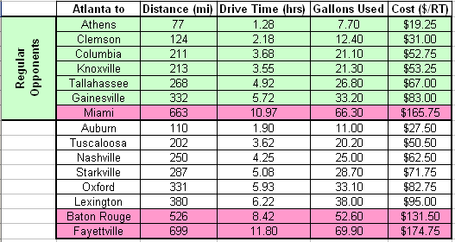 All of sudden our average drive time for road trips drops from 6 hours to 3.5 hours. We'd be burning only 10,200 gallons of gas/weekend trip (a 42% reduction). That means the Tech collective could be spending almost 18 grand more PER WEEKEND on more important aspects of the tailgate. Of course, this is all assuming the same amount of people would travel to every road game every weekend. And you never really know with Tech fans. Either way, I thought it was an interesting look into the expansion talks...