Share All sharing options for: Sporting City First Round Results and Baseball Stuff

After a bloody first round, all of the favorites minus one (Minneapolis) emerged victorious. Over 2,000 votes were cast including Detroit's record 695 votes in 24 hour increments. Here's a look at the voting results and what's to come in the following round: 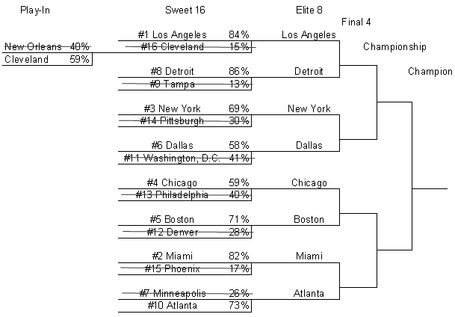 I also wanted to talk about the first weekend of the NCAA baseball tournament. As Winfield mentioned, we struggled mightily yesterday. I consider yesterday's effort a wake up call to the ACC. Here's a quick look at how the ACC has fared against the field. In the first three days, all of the fat was being cut from the field so none of the major conferences have really taken a hit yet: 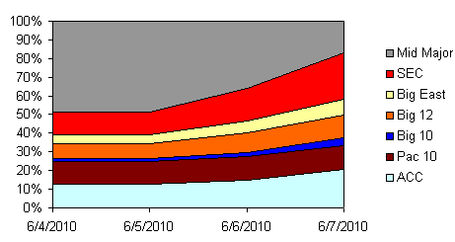 The issue, however, is that the ACC is in a very precarious situation tonight. We've got 5 teams still alive in the tourney but 4 of them could be eliminated before Super Regional play. This, of course, is the worst case scenario. If our teams win out tonight, the ACC would be the NCAA leader in teams passing to the Super Regional round. For another perspective on how we arrived at the ACC's current predicament, check out this chart:

Basically, the ACC wet the bed yesterday. With only NC State eliminated by Sunday morning, the ACC was looking solid coming into Sunday. Every remaining ACC team played a late afternoon/night game and in the final 7 games of Sunday, the ACC went 1-6 and watched Virginia Tech catch a ride on the slow bus back to Blacksburg. Hopefully, tonight the ACC shows its metal and takes care of business.

Also, Deck McGuire should become a millionaire tonight as the first round in the 2010 MLB Draft is drafted tonight at 7:00 PM on ESPN. This shouldn't be a distraction for him at all...right?