Since Danny Hall has been Tech's coach, Tech has been selected to the NCAA field 15 of 17 seasons (missed in 1999 and 2008). Tech has been the first or second seeded team in the regional every year except for 1 of those 15 berths (1995). Here is Tech's record in regional play based on seeding:

As a 1 seed in regional play, Tech has outscored opponents 9-5 on average but when Tech is not the 1 seed, Tech has been outscored on average 6-8. Statistically speaking, we've gotta be a 1 seed to advance. And thankfully, we are.

The final tidbit of info I'm gonna throw at you is common opponents. Tech has played 38 different teams from 18 states in the NCAA Tournament since Danny Hall took over. The most played state is South Carolina as we've played 12 games against 5 different schools from South Carolina. For reference, we've played 9 games against 3 different schools from Georgia. Here's a rundown of the most played universities during Danny Hall's postseason run at Georgia Tech: 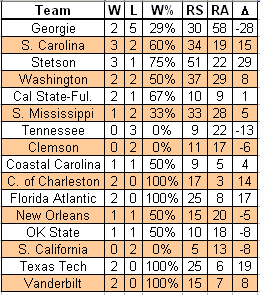