Boston defeated Miami in the first Final 4 Match Up. New York and Detroit have dispatched their opponents with ease. New York dispatched of Pittsburgh in round 1 and quickly fended off Dallas in round 2. Detroit drove a freight train straight through Tampa and Los Angeles. Now, the two Vegas favorites square off in the semifinals...

Brendan From Old Virginia fills us in on the high points of Detroit Sports History from a Detroit Fan's point of view:

Well, as you know, Detroit's history is a long one - you have to go all the way back to the turn of the 20th century to find the first of many good times. The Tigers were one of the American League's dominant teams in the later part of the decade, winning three straight pennants with baseball's first modern-era megastar, Ty Cobb. And even earlier than that, Fielding Yost's Michigan Wolverines had begun dominating the college football scene with his Point-A-Minute squads. The first ever college bowl game was the 1902 Rose Bowl, and it was also almost the last Rose Bowl; the Tournament of Roses organizers decided to give some other activities a try after Michigan laid such a demoralizing thrashing to local favorites Stanford that the Stanford team asked to end the game with eight minutes to go.

Anybody outside of Michigan calling themselves the City of Champions is an impostor: the title was originally Detroit's in the 1930s, as the three extant major league teams each reeled off league championships. The Lions were 1935 champions, the Tigers won the AL pennant in '34 and '35 and the '35 World Series, and the Red Wings took home the '36 and '37 Stanley Cup. Native son and war hero Joe Louis famously beat Max Schmeling in 1938* after taking the heavyweight boxing crown in 1937.

Speaking of the Lions, believe it or not there was a time they were the kings of the NFL jungle. Between 1951 and 1957 they racked up a 55-27-2 record, went to four NFL championship games, and won three of them. The Wings were just as dominant: between 1947 and 1956 they went to 7 of 9 Stanley Cup Finals and brought home the Cup four times.

Misopogon makes an epic return for this Final 4 filling us in on some relatively sad moments of Michigan sporting history:

Worst moment ever: we don't talk about it. We call it "The Horror." If you don't know what we're talking about, good; let's keep it that way.

Worst moment we can talk about without head 'splosions: "Football Armageddon," when over a 24-hour span Michigan lost Bo Schembechler to heart disease, and then lost a football game to a Buckeye team that featured Troy Smith, Lex Luthor, Baby Jaga, Sauron, M. Bison, cancer, Shai'tan, Lavos and He-Who-Must-Not-Be-Named. In 2007, when deity-existence questioning was definitively on the line, Michigan still lost again thanks to the deserving four-year starters all playing through horrible injuries.

In 1958, after quarterback Bobby Layne had led the Lions to three NFL championship games, the organization traded him away because of an injury. Layne promised the Lions wouldn't win for 50 years.* It totally worked. Said Donovan McNabb: "you can do this?" Had he said they wouldn't win in 50 years (i.e. wouldn't win in 2008) he would have been downright prophetic.

2006 World Series. Okay, Braves fans, imagine it's your team in 1991, you've gone from worst to first behind iconic, beloved rookies and young awesome pitchers and brand new traditions in a season that must have been touched by magic. Then imagine Glavine and Smoltz and Avery suddenly becoming error machines against the worst team to ever go to the World Series. Then imagine not having the rest of the 90s to make up for it.

Worst season by a Detroit team: So a guy walks into a bar with his dog. The bartender's like "you can't come in here with a dog," but our guy's like "c'mon he's a huge Lions fan, just let us watch the game." So the bartender lets them in. Some time later, the Lions score a field goal. The dog jumps up and down and barks and chases his tail in excitement. A little later after that, the Lions scored a touchdown, and the dog starts going nuts, running around the bar and giving high-fives to all of the other patrons, licking people, and generally yipping like mad. And the bartender's like "you weren't kidding: That dog is a huge Lions fan! What does he do when they win?" "Dunno," says our guy. "I've only had him for [X amount of time]."

Still, for many, the Tigers' putrid 43-119 effort (which ended with a six-game winning streak FYI) in 2003 was probably harder to live through, especially with local '80s hero Alan Trammell serving as sacrificial managerial lamb for a team nicknamed "The Replacements" (though few players on that team actually achieved replacement-level).

If you thought the end of the 2008 Mets season was the most remarkable crash in history, you need have only waited a year, as the '09 Tigers became the answer to every trivia question to ask "Xth team to be up Y games with Z games left in the season, and not go to the playoffs?" The collapse ended with a 13-inning 163rd game considered among the best games of baseball ever played, which we lost. (I was there!)

No city knows how to snatch defeat from the hands of victory like Detroit, or perhaps more accurately, officials of Detroit games. Most sports towns have a tinfoil hat society of one sort or another who preach of corrupt officials, rigged leagues and seriously pissed of deities. Ours is unique in that that they sometimes actually show up wearing actual tin hats: 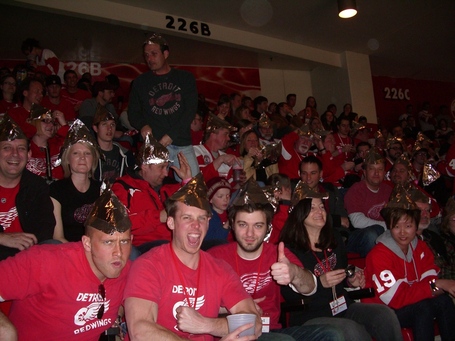 Last time we spoke with Chris from the Nova Blog, he was telling us about Philly fans massive hatred for all things Villanova. In the course of the e-mails, I learned that he was a big time New York fan and from the City itself so I decided to inquire into his NYC fandom. Chris tells me that New York has experienced great deals of success but recently New Yorkers would cite the following:

The high-point for me was the Football Giants winning it all in 2008. It was a miraculous one, and for what felt like the first time in a while, NY was a severe underdog. Not that we have great teams all the time, but it was a collection of scrappy players and a scrappy team, just the kind of team everyone loves rooting for. Running and defense. Doesn't get any better than that!

The 1994 Rangers come in a close second for me. I had the luxury of attending Game 7 and the image of Messier jumping up and down on the ice after the win will stick with me forever.

Chris is also a Mets fan (BOOOO!). And he tells us that the Mets have been a major source of heartache for his sports psyche:

The lowest point was easily the Mets collapse in 07. Yeah, they did it again in 08, but that really shattered a fanbase that has experienced hard luck throughout their history. I'm a die-hard Mets fan and I still find it hard to sustain excitement (although this year is definitely helping). Because of that meltdown, it feels like I'm walking around waiting for an anvil to fall on me.

I'd have to venture that Yankees fans were pretty down when the Red Sox came back from 0-3 and won the 2004 ALCS, which is easily countered by the billions of World Series trophies sitting in Yankees Stadium.

I had to add this 'cause I had it in the last poll. NYC and Detroit are very close in all time records against each other. NYC leads 1629-1566 over the City of Detroit in head to head match ups. Interestingly enough, the pro teams have met 56 times in the playoffs and are tied 28-28. 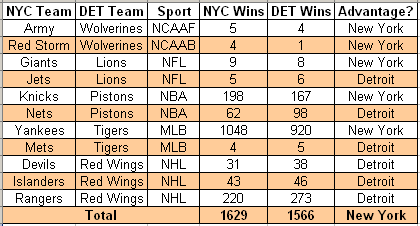 Alright folks, you've heard from Michiganders and New Yorkers. Feel free to spit venom at the opposing fans and prove why Detroit or New York is better than the other city and deserves to advances to the Finals.