I already previewed the EA Sports NCAA 11 Georgia Tech Defense. Now, I wanna hit up the offense. The offense as a whole is much better than the defense. EA has had a bit of an eye on our offense since Paul Johnson came to Tech with the flexbone. EA's spotlighting of GT's offense has basically guaranteed our feature running backs would be correctly labeled. Here's the run down:

The problem I have here is that Josh's accuracy is incredibly low. A 74 accuracy means you're gonna have a hard time hitting the broadside of a barn with Josh's hand cannon (94 throwing power!). T.J. Yates, Russell Wilson, Tyrod Taylor, Tajh Boyd, David Shinskie, Kyle Parker, Jacory Harris, and Christian Ponder are all more accurate in the game than Josh Nesbitt. Some I understand while others are debatable. I think all of the EA guys are giggling about this little flaw in the GT offense, "Let's force them to run the ball ALL of the time by ensuring that no ball will ever reach a receiver past 10 yards. HAHAHAHAHA!" BS. It's just odd when you look at the previous season stats for NCAA 11 and NCAA 10, you see that Joshua performed much better last season as a passer than he did in 2008 yet EA felt the urge to subtract 10 from his speed and 8 from his throwing accuracy.

Only one quarterback was left off the roster: Jordan Conant.

Running backs are the backbone of this roster. The average rating is 81.0 (second is OL at 80.0 overall average). The best RB being Roddy Jones is a little questionable but he is the most experienced and most publicized returning back. EA loves to give players the benefit of the doubt particularly if they're featured in big time highlights (ala 2008 Georgie game).

According to Ted, B.J. Bostic may get some reps so if you're looking at adding a particular RB, he's the one to look at. The most interesting side note of the running backs is that Lucas Cox and Orwin Smith were listed as Tight Ends. This means they'll be included in some of the weird goalline and TE formations. I thought that was interesting. Here are the running backs on Tech's real roster that didn't make the video game cut: 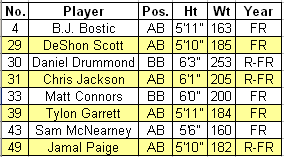 The Offensive line is particularly solid. Austin Barrick provides a key backup for pretty much every position. Nick McRae and Tyler Kidney are even viable options in dire situations. Someone more familiar with the offensive line can tell me how the depth chart is gonna shake out. Here's the list of dudes who didn't make the video game, if you feel inclined to add some people: 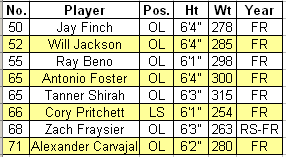 Well, they did a good job of including almost every Tech receiver. My problem with the game is the relatively low ranking of Stephen Hill. He's a little unproven and GT runs the ball 65% of the time but come on! Tech needs a wide receiver otherwise this offense won't go. A rating of 78 makes Stephen Hill the 17th best player on offense. That's unacceptable. Also note that Quentin Sims and Embry Peebles are the fastest players on the team at 94 speed. I was under the impression that Kevin Cone was on the 2-deep so EA leaving him off the roster is just sad:

I think the offense will be enjoyable for those who love to run the ball on every play and don't like to score a lot. Unlike last year's roster with Demaryius Thomas (88 overall, 88 speed, 86 catching, 92 jumping in NCAA 10), Tech will be fairly putrid in the passing department this season. I think using "tight ends" Orwin Smith and Lucas Cox will be a good secret weapon amongst Tech aficionados. Good luck to anyone that chooses Tech. Hopefully, things work out for you.