I'll admit I haven't played NCAA football for a while but I still think it's a damn good video game on X-Box. I kinda lost touch when they transitioned to the 360 and sacrificed a higher game speed for better graphics. With regards to the game, they use a roster almost identical to the real Georgia Tech roster every year but there are always major glitches that are attributed to merely bumping up every non-star player's age by a year. There are always position changes that aren't fixed, incorrect numbers or physical dimensions of players, and more. So, I'm gonna review the defensive side of the NCAA 11 Georgia Tech roster found on the EA Sports Team Builder.


Concerning accuracy, this is probably the worst unit in the game for Georgia Tech. Two of the best three defensive lineman listed are actually jack linebackers (Tongo and Egbuniwe). If you move them to linebacker to reflect the actual roster, this leaves pretty glaring weaknesses at your defensive end positions.

There are three freshmen listed on the roster as well (marked as ?). I'm assuming they are Euclid Cummings, Ben Keith, and J.C. Lanier. Cummings may have an important role in the roster now that Robert Hall's future with the team is uncertain. Here are their correct bios, if you want to correct them in your roster:


The linebacker group is alright compared to the defensive line. We are missing a starter a project started in Anthony Egbuniwe but I already covered that. The only other big time mistake is that #44 Albert Rocker was left off. You're gonna want linebackers if you play the Al Groh-fense 3-4 so I'd advise putting him on the roster before the freshman 'cause Rocker will definitely see some PT. If you feel guilty about making up stats, use one of the freshman templates and bump up the awareness so he's chasing digital butterflies on every play. Here's a list of players that were not included in our linebacker list (mostly freshman, walkons, and redshirts): 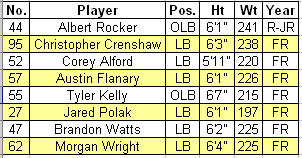 
I definitely agree that Mario Butler will probably be our best defensive back this season but EA kinda shorted Jerrard Tarrant. First, they relegated him to nickelback (after 14 starts at corner last season). Second, he's a starting safety now. And finally, his kick return rating is lower than almost all of the defensive backs despite returning two kicks to the house last season. The only numbering problem is Jemea Thomas who was incorrectly numbered #4. He should be #38. They might've just mixed and matched names here. Cooper Taylor is a little underrated and I think we'll see him starting by the end of the season. This is definitely attributed to his listed awareness of 60.

All in all, I'm not too terribly upset though because the defensive backs as a whole are our best defensive unit in the game and will probably be our best unit next season as well (average 79.3 overall rating). Here's a list of guys that aren't in the game that you can plug in if you want to:

After first looks, I'd say the defense is not nearly as correct as the offense but then again most EA fans will be scrutinizing our offense more than the defense anyways. The glaring issues, to me, are the downgrading of Jerrard Tarrant as a DB and returnman. As far as gameplay, the relative weakness will be the defensive line. Good luck to any GT users out there. You're gonna have a helluva time stopping the run. Also, HT big time to BCI for the idea. The game releases July 13th.