How important is a quarterback's age in the ACC?

Share All sharing options for: How important is a quarterback's age in the ACC?

I read a piece the other day that said GT may regress in 2010. I think one of the biggest reasons Tech fans feel like GT won't regress is that the offense will be led by an experienced senior quarterback. Today, I want to look at whether or not a quarterback's class in school (freshman/sophomore/junior/senior) actually affects the win/loss column in ACC play.

First off, I truncated the ACC down to the modern post-expansion era (2005-2009). Over 55% of the ACC's quarterback starts since 2005 have been made by upperclassmen. There seems to be a 2 year cycle where the old quarterbacks matriculate and young quarterbacks rise up to replace them. When we match up a QB's class with his win percentage, we see something slightly odd:

Freshmen and juniors lead the way over seniors and sophomores. And sadly this is where we see the "Riley Skinner Effect." Basically, there is an odd trend in the ACC for senior quarterbacks to struggle. As one of the few 4 year starters in recent ACC history, Riley Skinner actually won less and less ACC games every season from Freshman-Senior year. In fact, there have been 19 different ACC senior quarterbacks since 2005. Only 5 of them have had >0.500 records while 14 of them have had ≤0.500 records. Maybe there's a reason the ACC hasn't had a legit NFL QB prospect since P. Rivers or Matt Schaub (hint: poor QB development). 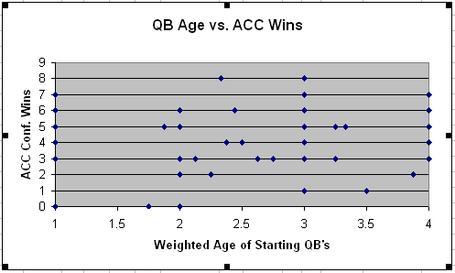 The above chart shows the average age of each ACC squad's starter for each year and the wins they racked up that year. For example, GT started Nesbitt for 7 games in 2008 and Jaybo for 1. So the weighted average age would be (7 Games * 2 Years + 1 Game * 1 Year)/8 Games = 1.86 Years or the average starter for GT in 2008 was just under a sophomore in class. I didn't take into account redshirting. I played the Notre Dame card.

Now, I guess you're wondering what schools started what aged guys 'cause that's a pretty big question. Schools like Duke, NC State, and UNC that use quarterbacks as punching bags for opposing defenses are actually not the worst schools at producing senior quarterbacks since 2005. FSU has yet to have a senior quarterback start since 2005 and VT has only had 2 senior starts since 2005. Here's a more in depth chart of all the ACC schools: 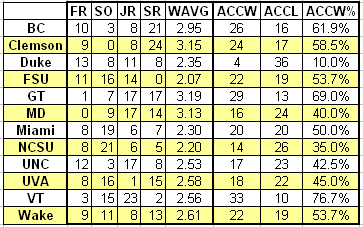 All in all I started looking into the whole mess of data when I wanted to show a correlation between age and success. In actuality, it's difficult to correlate anything amongst 12 ACC schools that have completely different offensive philosophies, substitution habits, and player loyalties. Plus, 98 starts/year over a 5 year span aren't enough data points when considering 5 years could be the lifespan of a single QB skewing the data even more. But either way I wanted to show you all the data and get your opinions.