If GT could field a World Cup team...

Share All sharing options for: If GT could field a World Cup team...

I saw this very interesting blogging on Yahoo!, which basically said that America's best athletes don't play soccer for America yet. The blogger then goes on to choose 11 of the NFL's best athletes to be on his World Cup team. So for all the hooligans out there, here's a Georgia Tech World Cup team devised by avid GT fan/hooligan Brendan and myself (assuming we go back in time and tell all of these GT athletes to practice soccer rather than their respective sport). Please note that we didn't go with the foolish 5-3-2 formation but rather a more practical 4-3-2-1: 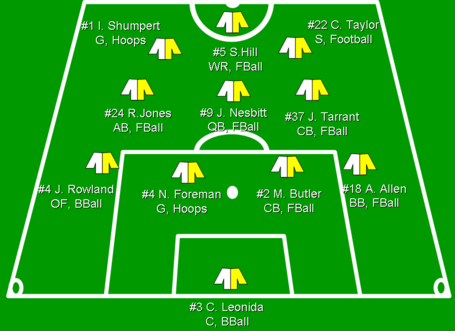 I'll let you know my thought process behind a few picks. I put Leonida at goalie 'cause I figure he has the fastest reflexes and best hand-eye coordination of any student at Georgia Tech. Plus, he's 6'3" and 215 pounds. That's about Tim Howard's size.

We surrounded Leonida with some of the best and most experienced defenders at Tech in Mario Butler and Nick Foreman. Jeff Rowland provides some speed in the back as well (Tech's leader in stolen bases). Anthony Allen provides the size and tenacity that any smart striker would have to respect.

Our midfield is a smaller midfield but we felt this was the area where we needed guys who could lead our team against the forces of Communism/Socialism/Hippyish/Veganism in the World Cup. Nesbitt, Roddy, and Tarrant know adversity and they are also sick ballers.

Our striker and wings are pretty self-explanatory (Hill, Iman, and Cooper). Pure athletes. Pure speed. Who wants to match up with a 6'5" 2-guard, 6'4" wide receiver, and 6'4" safety on a corner kick? All three of those guys most likely have 30" verticals. Plus, they're not awkward or gangly 6'5" Eastern Europeans. They're 6'4" beasts that would wreak havoc amongst defensive backs.

Let me know who you'd move around or replace. Who would be on your bench?