Where do Tech alumni live?

Share All sharing options for: Where do Tech alumni live?

On the theme of analyzing home attendance at GT football games, today we're attacking the distribution of GT alums across the 50 states and globe. A quick look at the Alumni Association Fact Book shows us that there are 107,818 alumni living in the United States. 50,130 of the U.S. residents live in Georgia while around 11,000 alumni locations are unknown. There are 4,315 alumni living in other countries with the most popular foreign residences being France, Germany, India, and South Korea. This doesn't surprise me as Tech has a campus in France. Germany is a military foothold in Europe for the U.S.. And India and South Korea are big time feeder nations for Tech's undergraduate and graduate programs.

The first thing I wanted to look at was how many people are in the State of Georgia. I personally believe there isn't a distance too great for Tech fans to travel from within the State. Valdosta to ATL is a tough drive but at least it's all interstate. I used the county distribution data from the Alumni Association to come up with this map: 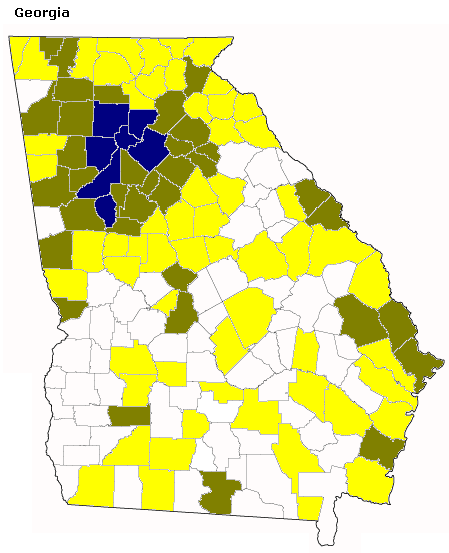 I think the first question that needs to be answered is whether or not Tech fans aggregate around cities or if are they distributed evenly across the state. The average percentage of GT alumni per person in each county is 0.23%. There are only 5 counties that have a population that is greater than 1% GT alumni - Fulton, Fayette, Dekalb, Cobb, and Forsyth. So this kinda gives us a pretty good idea already but just to reinforce the fact that Tech fans congregate in urban/suburban areas, here's a chart:

I'm not exactly sure how this would work, but I would think that understanding the average distance between the stadium and the fans would have somewhat of an impact on attendance.

So, let's look at how far the average instate alumni (sorry non-alums) would have to drive to make a game. Assuming everyone in each county lives close to their county seat, we see that ~79% of Tech's instate alumni live within 40 miles of Bobby Dodd Stadium. That should give us a pretty big chunk of the regular attendees at BDS every Saturday (72% capacity). A 40 mile drive to a football game would be awesome, to me.

The issue with not filling the stadium really begins to irk me when I look at the alumni figures. This map shows the distribution of alums across the U.S.. If I can make GT football games, everyone in South Carolina, Alabama, and Tennessee should be able to make GT football games. That's 8,710 alumni + Georgia's 50,130. If you bring in North Carolina and Florida, which are just out of driving range, we're talking about 71,013 alumni living within sane driving proximity to BDS. And we're still not factoring in our non-alumni fans. So I have devised a plan to fill the Stadium next season...

Below is a map of the Southeast. There are two concentric rings around Bobby Dodd Stadium. The burgundy ring represents an easy drive to the Stadium (1.5 hours). It's called the Winfield Ring because it is based around the straight shot drive from ATL to Macon. All Georgia Tech alumni within the Winfield Ring must attend every game next season. This will bring in approximately 40,000-42,000 alumni per game (not to mention sidewalk fans). The additional 13,000-15,000 fans will be from the green ring or Bird Ring, which is based off of the intersection of I-95 and I-20 in South Carolina (a 5 hour drive). If you live outside of the burgundy ring but live within the newly dubbed Bird Ring, you must attend half of the games or have a surrogate in your stead. Any vacancies will be taken care of by opposing fans. It's a simple plan. Here's the map: 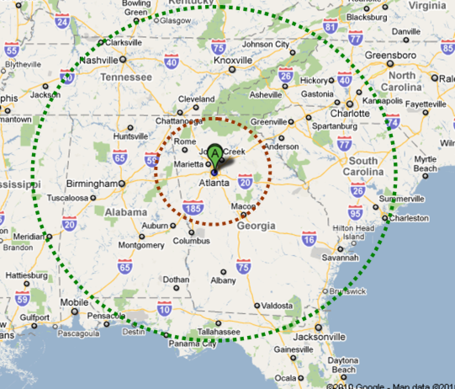