So, today is the three year anniversary of the accident. The picture above is the second time I drove out on to the field against Samford in 2007. You can see the really bad lean that wasn't repaired until Winfield's tenure (I believe). In fact, if you look closely at the left door frame, you'll see damage that was essentially irreparable. In retrospect, the guys that did the body work did an amazing job.

According to the owner of the body shop, which I believe is closed now, the body work was performed by several Eastern European immigrants. He said that in their home country, no one throws away anything. They learn to fix everything so all of the kids grow up expert metal workers. The pic below is of the car after the metal working, painting, and roof had been assembled on August 21, 2007: 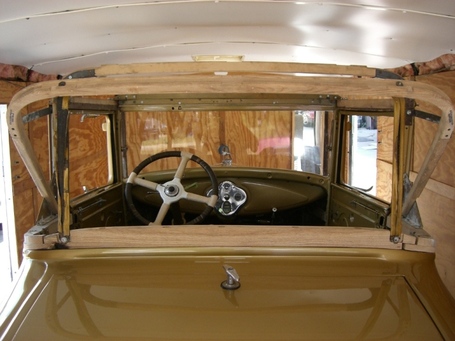 On August 21, we loaded the car up to be taken to the roof and upholstery shop. Bo Emerson, a former AJC writer, actually helped to push the car into the trailer with some of the shop's mechanics. It was the first time after the accident that I felt like the car would be ready for the Samford kickoff.

Anyways, if you've got any spare cash from a big raise, shoot some dough at the new Ramblin' Reck Driver. I hear he's single and looking (in case you're a lady) Sorry ladies, he has a girlfriend. But if you want a washed up has-been, Winfield continues to be single...and now has a job which equals straight cash homie.

Here's the link for more information.